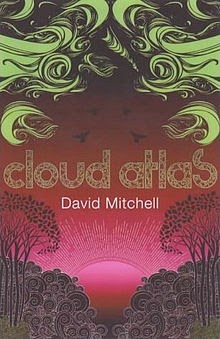 Cloud Atlas is a novel based on six hierarchically nested stories that stretch from the diary of a 16th century mariner in the Pacific Ocean to the life of someone living in a post apocalyptic Hawaii. To be honest, I thought the novel would be more complex, instead their appears to only be the most tenuous of links between the century spanning stories. That said, Cloud Atlas, is extremely enjoyable and very readable. With each story Mitchell uses a different style, meaning that some chapters are very funny, others tragic and some disturbing.

Reading the reviews after the book, it seems that the literary types got carried away with how unique the book is. While the idea of characters being re-incarnated through history is unusual, it isn't unique. Kim Stanley Robinson does it brilliantly in The Years of Rice and Salt for instance. But Mitchell tries to minimise the links between his stories, with characters only very occasionally having flashbacks that the reader can knowingly enjoy but which leave the characters confused. Cloud Atlas is a fun, unusual and well-written novel that will appeal to the reader looking for something different. Its prognosis for the future of humanity is notably bleak though.
Posted by Resolute Reader at 8:10 pm