Gregory N. Flemming - At the Point of a Cutlass 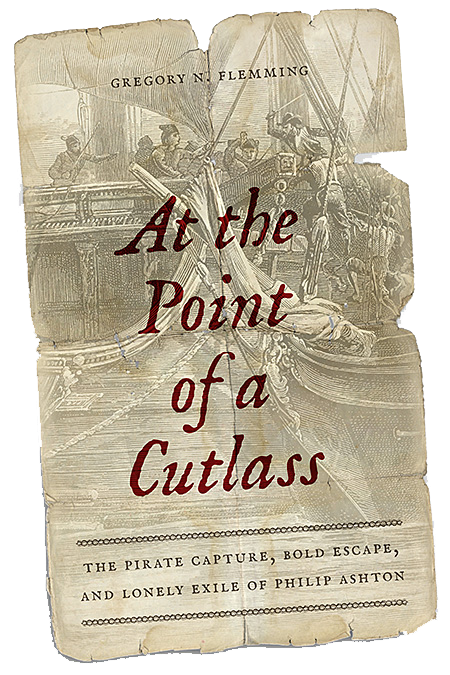 At the heart of this book is the near unbelievable story of the "capture, bold escape and lonely exile of Philip Ashton". It is an amazing story of pirates and castaways, but around it, Gregory N. Flemming has woven the fascinating story of the Golden Age of Piracy, as well as conflicts between Spain and England, the slave trade, the radical preaching tradition and buried treasure. It's a book that is both historically informative and an entertaining read, and one that puts paid to many myths that have developed about piracy.

Philip Ashton was a cod fisherman who was captured by the Pirate Edward Low in June 1722 off Nova Scotia. Low was to gain infamy because of his successful piracy career and because of his violence. This was such that eventually his own crew rebelled against him, but not before Low had captured many vessels, run the Royal Navy a merry chase, and murdered many men. As Marcus Rediker has argued, pirates in the Golden Age were both attempting to escape the violence of the Atlantic shipping industry and enriching themselves. Surprisingly though, they tended to organise in far more democratic ways than existing ships. Rather than the rigid hierarchy of merchant or naval vessels, pirate crews elected and deselected their captains, a fate that was to eventually befall Low.

This view of piracy is the backdrop to Flemming's book. It helps to explain why, when Philip Ashton refused to sign the ships' articles (effectively signing up to a life of piracy) Edward Low was so angry with him. For Ashton signing up, might mean escaping the threat of violence from the pirates, but would mean the end of a rope if their ship was captured.

Ashton eventually escapes by marooning himself on an island. With no clothes, tools or weapons he barely survives, until a rather improbable episode with a passing Scotsman gives him the tools to live on. Ashton survives two years on the island, eventually meeting a group of logging workers fleeing the violence of the Spanish - English conflict. Then, in yet another awful coincidence, Ashton is nearly captured by some of the same pirates he escaped from years before. Eventually Ashton makes it home, where an unusual local minister writes down his story. In the puritanical world of north-eastern America, novels are frowned upon, but stories that suggest the positive input of a benevolent god quickly become bestsellers. Because of this, while Ashton himself returns to a quiet life of fishing (though Flemming wonders how he felt every time a large ship appeared on the horizon) his story lives on, inspiring many, even on the other-side of the ocean. Daniel Defoe, the author of Robinson Crusoe, appears to have read and drawn inspiration from it.

The story of piracy, sea battles and the castaway alone would make this an enjoyable and recommended read. What really adds to the story is the historical background. At times Gregory Flemming has perhaps included a little too much detail. That said, the book paints an detailed picture of the Americas, whose Atlantic coasts were crisscrossed by networks of trade - slaves, fish, furs and wood. This creates a political and economic battleground for the European powers within which piracy flourishes (and is at times actively encouraged). But we also see the beginnings of the United States as an economic power in its own right.

Such conditions - the danger, violence, poverty and potential riches - meant that piracy would inevitably arise. Sometimes that meant that men like Edward Low with his taste for killing and torture would also exist. But without the lives of men like Philip Ashton, who daily risked their lives for a boat load of cod, Low could not have existed and nor could the wider Atlantic economy. Gregory Flemming's book is an excellent introduction to the subject and the period, which is both entertaining and illuminating.

Linebaugh and Rediker - The Many Headed Hydra
Rediker - Between the Devil and the Deep Blue Sea
Rediker - Villains of all Nations
Posted by Resolute Reader at 12:56 pm