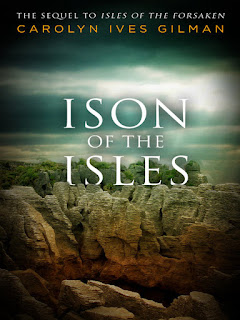 Ison of the Isles is the sequel to the marvellously original novel Isles of the Forsaken which I reviewed a few weeks ago. It is such a direct sequel that it really reads as part two of a single volume and the publisher might want to consider re-issuing the two books in this format in the future.

Forsaken told the story of the colonial ambitions of the Innings in the Forsaken Islands. Their military interventions and the threat to the lives and culture of the people of these Islands leads to an initial uprising, led by a former naval commander, Harg. This uprising rapidly becomes a revolution against colonial rule, one that in this sequel is being bloodily suppressed by the Inning naval forces. Massacres and violent attacks on towns are leading to enormous numbers of refugees and growing calls for action.

The problem is that the only real option that is apparent to the islanders is military and despite Harg's strategic genius there is no way he can defeat the overwhelming military force being deployed against him. This means that the islanders' only option is to turn to their cultural and religious beliefs to save them. They look for a traditional leader, the Ison, who can lead them. The Ison however has to go through a ritual that will transform him, and the only person who can do that is a Lashnura woman Spaeth, who has the magical abilities but not the experience.

At the heart of this novel, as in its prequel, is the clash between the new rationality represented by the "developed" or "modern" nation of the Innings as contrasted to the "old" beliefs of the Forsaken islanders. As I argued in reviewing the first novel, when in our own history colonial powers have encountered people they want to control, these clashes are not simply cultural - they are rooted in the economic and political nature of the respective societies.

In Ison as in the earlier book the difference is that these forces are very real indeed (at least for the Islanders). Spaeth is able to encourage her gods to use their powers over storm and sea to try and sink the Inning naval ships. Unfortunately, in a brilliant illustration of the central theme of the novels, the captain of the Inning flagship is able to make a lightening conductor to protect his vessel from the vengeful gods. The captain's rationality appears to tame the extremes of nature, but in reality he unknowingly defeats a god.

Carolyn Ives Gilman has clearly built on her understanding of the beliefs of the native peoples of the Americas to create this wonderful fantasy. However she takes this further. There is a darkly humorous part of the book were one of the Islanders is convinced to marry an Inning. The ritual means nothing to her. She cannot comprehend the idea of being a virgin at marriage, or how important monogamy is to the Inning, nor the idea of having a single partner for life.

I also enjoyed the way that different revolutionary strategies are played out. There are those that want to try and defeat the colonials at their own game, but the Islanders' technology and economic system isn't yet strong enough, nor can they win in the courtroom which is rigged against them. The problem for the author is that there is no real solution.

This is a military conflict that the Innings are going to win despite the heroism and the tactics of the Islanders' soldiers. The Forsaken Islands will not be entirely subdued and ultimately, as in the real world, the colonies will rebel and kick out the oppressor. This contradiction means that the end of the novel is somewhat unsatisfying. That said this is an enjoyable read about a fantasy world of magic and warfare that mirrors the clash between oppressed and oppressor in our own history. I look forward to Ms Gilman's future writing.

Gilman - Isles of the Forsaken
Posted by Resolute Reader at 10:13 pm