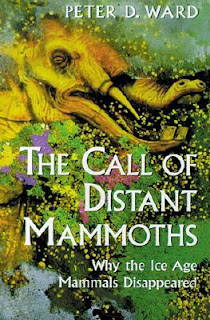 The massive extinction of the large mega-fauna towards the end of the last ice-age provides for a complex and surprisingly passionate debate. This shouldn't be a surprise - if the Mammoths and Mastodons of North America vanished because of climate change, or because of our ancestors hunted them to extinction, there are salutary lessons for us today.

Peter Ward tries to get to grips with what happened and why. To do this, he starts by looking at previous mass extinctions - there have been fifteen of these in the last half-billion years. Of these, Ward explains that five were "major", destroying over half the planet's species. Shocking though these statistics might be, Ward makes the point that we owe the existence of our own species to one of the most famous extinctions.

The disappearance of the dinosaurs 65 million years ago created the ecological space meaning that our own mammal ancestors had the space to grow, develop and evolve.

Ward looks at the various extinctions in turn - both to enable us to understand the megafauna extinction better, but also to help explain some of the central arguments around what you might dub, extinction theory. How we measure when a species dies out is complex - there isn't simply a visible line in the Earth's strata. Creatures that vanish often look like they are gradually dying out in the fossil record, leaving it hard to pinpoint what exactly happens.

The author does put both sides of the argument - for extinction of mammoths by human action and through climate change. He favours the first, so develops the theory of this more - looking at various arguments and ideas about how this has happened. The Clovis people who entered the North American continent at the end of the last ice-age clearly hunted the animals they encountered. These, as Jared Diamond argues well in Guns, Germs and Steel, had no experience of humans and had no instinctive fear of the hunter.

But Ward argues that the idea that mammoths were simply wiped out by the hunger of human mouths (as argued by Tim Flannery for instance) isn't correct. Describing the mathematical modelling of animal populations, he points out that recent research shows that a small, but systematic reduction of numbers for a population can systematically undermine the viability of a animal population. Putting an explicit figure on this, he argues that humans only had to kill 2% of the Mammoth population to help cross a "critical threshold" which meant that the whole population could crash in less than a century.

Citing evidence that mammoths that had been found were well fed and giving birth regularly, he argues that it is unlikely that we are discussing a weakened population of animals. Mammoths did not die out from starvation.

It should be pointed out that this is an explicit argument for the North American continent. In Siberia, for instance, the Mammoths were unable to survive the Ice-Age - a very different situation.

Ward argues his point well. I am sure there are arguments against his but there is much to be gained from this book even if his central tenets aren't correct. His discussion on the problems with conservation of modern day elephants, based on the computer models of isolated populations, argues well against some conservation practices used in Africa today. His explanations of why extinctions occur are useful to anyone concerned about the planet's eco-system today, though his pessimistic conclusion will not be to everyone's taste.
Posted by Resolute Reader at 8:23 pm