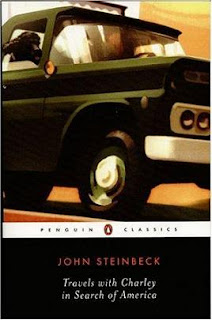 John Steinbeck's trip around the United States in the early 1960s captures beautifully a country in transition. Coming out of the Second World War, America was riding the rising tide of a seeming economic miracle. Gone were the dark days of war, memories of the depression were vanishing into the mists of time, and consumer spending was rising up and up.

Steinbeck's journey captures in a series of flashbacks and musings, the changing America. He doesn't lay it on thick, but you get the impression of a man watching with cynical eyes. From the boom in "mobile homes" were the inhabitants can chase economic prosperity forever, and carry with them the mod-cons of urban life, to the bland and boring road side food that he finds from the east to the west. Here Steinbeck sums up the way that America was becoming more generic as he ruminates on roadside rest stations.


Civilisation had made great strides in my absence. I remember when a coin in a slot would get you a stick of gum or a candy bar, but in these dining palaces were vending machines where various coins could deliver handkerchiefs, comb-and-nail-file sets, hair conditioners and cosmetics, first aid kits, minor drugs such as aspirin, mild physics, pills to keep you awake.

He continues, touching on the restaurants:


The food is oven fresh, spotless and tasteless; untouched by human hands. I remembered with an ache certain dishes in France and Italy, touched by innumerable human hands.

Steinbeck's writing is beautiful, but never too florid. The brief pencil portraits of the people he meets along the way left me wanting more. The conversations are pared down to basics, and we wonder what has been left out. But enough is there to allow us to understand what that person is. Their hopes, dreams and ideals.

Some of the writing is lovely and I wondered why this book wasn't better known. Though perhaps it is in America, the place it is dissecting.

Of particular note to those interested in social history must be Steinbeck's visit to watch the National Guard escorting young black children into a mixed New Orleans school. The vicious, racist protests are difficult to imagine. Steinbeck's portrayal of the anger and violence brings these early steps in the struggle for civil liberties alive in a way that the old news footage has never done. His discussions about the way forward with fellow travellers show an impatience with non-violent direct action by some, perhaps another reflection of the frustration and anger that many must have felt towards the priorities of the America of the early 1960s.
Posted by Resolute Reader at 7:38 am

I read this years ago, before I'd ever heard of "social criticism", and at a time where I near-worshiped the culture of the 1950s. I was barely a teenager, but I remember the book haunting me.

Now that I'm older and have my own gripes with homogenized consumer culture, I should revisit it. Thanks for the reminder.