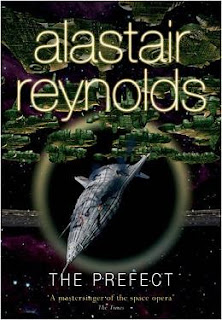 The Prefect is another of the "Revelation Space" novels of Alastair Reynolds. Reynolds enormous output is fairly stunning - but the interconnectedness of his works is also impressive. This novel fills in some of the background to his earlier works. Set in the 25th century humans have progressed out into the wider galaxy. The Glitter Band is a area of thousands of habitats that orbit planet Yellowstone.

The band is overseen by Panolpy, whose Prefects are responsible for protecting and co-ordinating the lives of the millions of human inhabitants. Readers who have read earlier novels will be aware that a disaster hits the Glitter Band in its later history but of course those characters in this particular time frame aren't aware of this.

Democracy is central to the story. Panolpy governs but is restricted by the democratic control of the Glitter Band's inhabitants. The Prefects cannot arms themselves unless they win a vote. The inability of Panolpy to respond to an initial military crisis, because they lose the vote to get arms is one of the more interesting points of the novel. The fact the government ignores the democratic decision might raise a wry smile from voters back on today's Earth.

Democracy looms elsewhere in the story. We are taken on a brief tour of some of the human habitats. In one of these, inhabitants are considered to be better at making decisions that others. Because they can better juggle different factors, they are considered more worthy of consultation. A non-hierarchical democratic utopia exists as the inhabitants sell their greater judgemental abilities those in the outside world who want to make decisions. This market in improved democracy hardly seems impossible when considering some of the things that currently traded on the free-market.

The story revolves around the struggle to protect the status-quo from an external force. Aurora is an unknown individual who claims to be aware of the future disaster. She plans a violent takeover of the whole band, to put in place a regime capable of preventing the Band's destruction. The battle to stop this happening is the central theme of the book. Of course knowing that the Band is eventually destroyed and millions of people killed leaves open the question about who is right. But convention must remain, even in future history, and good eventually triumphs over evil.

Sadly though the very setup of the story despite all its democratic overtones is really an argument that an enlightened few can govern, or rule in the best interests of the many.

Reading as a more fluid novel that some of Reynolds' other works in this series, The Prefect fills many gaps. The other works can often feel too large in scope, and The Prefect pitches itself well, remaining self contained, but giving a good glimpse into the wider universe that Reynolds has created.