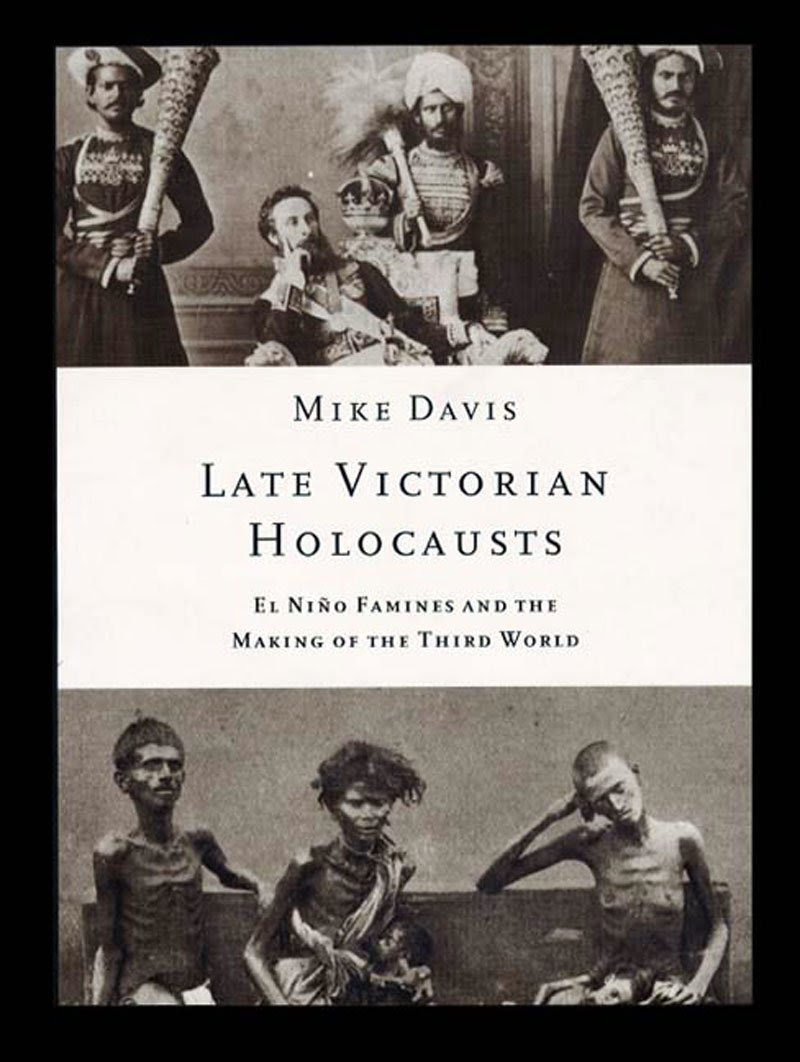 Ever so often you come across a book which profoundly shakes you. Mike Davis' Late Victorian Holocausts is one of those. On every page there is a fact or figure that makes the reader rage with anger; every chapter is a ringing denouncement of capitalism and colonialism. It should be required reading for all those politicians, journalists and armchair generals who profuse to know what to do about the "Third World".

In the late Victorian era, a period stretching from roughly 1876 to 1900, a series of droughts and famines hit large areas of the world. Various studies, both contemporary and more recent, paint a truly appalling picture of the resultant deaths. A study by the medical journal The Lancet in the immediate aftermath suggested that 19 million Indian people died during the 1896-1902 famine. The totals from all the events, allowing for the variance of scientific debate suggest between 31.7 and 61.3 million died.

Mike Davis argues that these were not merely environmental disasters. Changing weather patterns were caused by the complicated ENSO changes of air-pressure and ocean temperatures. The El Niño effects certainly could be associated with dramatic changes in rainfall, or wind patterns that brought crop failure or flooding to large areas. In late Victorian times politicians and apologists for colonial policies made much of the supposed links between these weather patterns and regular famines. But Mike Davis argues that the economic policies and the particular nature of colonialism (specifically in the British Empire) made, in places as diverse as Brazil, India, the Philippines, Korea, Africa and China, the famines far worse. As Davis suggests, of the victims:


They died in the golden age of Liberal Capitalism; indeed many were murdered... by the theological application of the sacred principles of Smith, Bentham and Mill.

I've written elsewhere about the Irish Potato Famine and the way that British rulers application of the principles of Free Trade condemned thousands to starvation while grain was shipped out to be sold at a profit. What Davis describes is a similar process on an enormous scale:


Although crop failures and water shortages were of epic proportion.. there were almost always surpluses elsewhere in the nation or empire that could have potentially rescued drought victims.

It is worth repeating this simple fact. That (with the possible exception of Ethiopia in 1899) Davis argues that there was almost always enough food or other supplies that could have helped the starving peasants. The people didn't just starve - sometimes they sold their children into slavery in the hope they would survive, or killed strangers and committed cannibalism, or ate tree bark and mud. But their deaths, or many of their deaths, could have been avoided.

Take the official report on the Bombay famine of 1899-1902, which concluded that "supplies of food were at all time sufficient and it cannot be too frequently repeated that severe privation was chiefly due to the dearth of employment in agriculture." In neighbouring Berar, commissioners said that "the famine was one of high prices rather than a scarcity of food."

The problem was that the hungry couldn't afford to eat. It was rarely that there wasn't food. For instance Davis argues that the problem in the case of India was that the British had transformed the old social relations. Under British rule, profit was king, but so was private land. The British destroyed the old economic relations that gave peasants access to communal land and resources like wells. They broke up the old social obligations that meant Chinese rulers stockpiled grain for famine outbreaks. They scrapped the requirements to build or maintain flood defences or dams, because they were considered native, and not valid scientifically. All these facts helped make famine far worse when it arrived. Indeed some of the most shocking descriptions here are when Davis contrasts the way that before colonialism, societies in India, Africa or China dealt far better with drought than under the Imperial era.

But there was a reason the British behaved like this. Over the 19th century the peasants of South America, Africa, China and the Indian subcontinent became attached to a world market. In a case study from India, Davis describes how the real local power was the Manchester cotton barons who effectively, through their representatives in the Raj, imposed a cotton market on some of the most arable land in India. By changing the local taxes, getting rid of previous local government structures and altering property relations, the British turned the area into a vast cotton factory which produced wealth for the cotton owners of Lancashire, but poverty for the native Indians. When famine came the peasants had no crops to eat, but nor did they have enough money to buy food. The logic of the market was then to abandon them to their fate.

And the vast infrastructure that the Empire builders created, the roads and rail-roads didn't serve to bring food to the hungry, it took it to where the profits were to be made. In the 1870-80 famine, according to official reports, In Bombay and Madras Deccan, "the population decreased more rapidly where the districts were served by railways than where there were no railways." It was easier to take the food away with trains. Davis also writes on how modern industry failed the hungry:


The newly constructed railroads, lauded as institutional safeguards against famine, were instead used by merchants to ship grain inventories from outlying drought-stricken districts to central depots for hoarding (as well as protection from rioters). Likewise the telegraph ensured that price hikes were coordinated in a thousand towns at once, regardless of local supply trends.

This is not a happy book. When Mike Davis describes the vast celebrations for Queen Victoria's Jubilee that involved enormous feasts at a time of vast hunger, most readers will feel sick. I certainly did. But the really sad thing is that nothing has changed. Capitalism's distortion of agriculture through the creation of cash crops and the domination of large multinationals leaves millions still in a precarious place, and as Mike Davis suggests, all the evidence is that global warming will make El Niños worse in the future.

Anyone interested in the confluence of the environment and the economy and the impact upon human beings should read this book. But so should anyone who wants counter-arguments to those who suggest that Empire was a good thing for the majority of people in the world.

Davis - Planet of Slums
Davis - The Monster at Our Door
Woodham-Smith - The Great Hunger; Ireland 1845-9
Bello - The Food Wars
Magdoff & Tokar - Agriculture and Food in Crisis
Posted by Resolute Reader at 9:19 pm