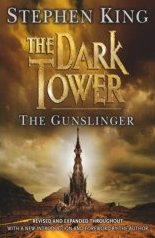 In the introduction to this, the revised and expanded version of the novel, Stephen King makes it clear that he thinks that the series of novels that starts with “The Gunslinger” is his most important and complex work. His Magnum Opus if you like.

Certainly it’s a very good novel, a blending of fantasy and SF, with influences from all sorts of imaginable genres - King makes clear his debt to “The Good, The Bad and The Ugly” for instance.

He also makes clear his debt to “The Lord of the Rings” and here I think is were it starts to unwind. King didn’t want to re-write the “LOTR”, thank God. Nor did he want to steal, borrow or copy the characters, locations and settings. Unlike just about every other fantasy author you can think of. King clearly set about trying to capture the scope and the imagination of Tolkien’s invented lands. But I think he tries to hard.

The tale is of a lone gunslinger (the last of his breed, as a film caption writer will no doubt have it one day) pursuing a mysterious black clad man across a desert. The story moves quickly from its classic western style opening to become more fantastical. With magical goings on and a confusing sense of time for the characters contributing to a tale that’s both readable and confusing. But at every stage you feel King’s setting up a wider mythical back-drop. Rather than the story arising naturally out of events it feels clunky, like things have been bolted on rather than fleshed out.

Don’t get me wrong, I think Stephen King’s a fantastic writer – the novel “IT” is one of the most enjoyable books I have had the pleasure to read and re-read over the years. I just think that in this early book, King spent too long trying to create an epic, rather than telling a story which would naturally pull in the epic around it, purely because of it’s scope.

The fan-sites imply it gets better with volume two. Lets hope so, otherwise it could be a long turgid trip to volume seven.
Posted by Resolute Reader at 1:33 pm

It does get better with the second book :) stick with it- but once you continue on with the saga you will realize that the first book is the most important one of them all.