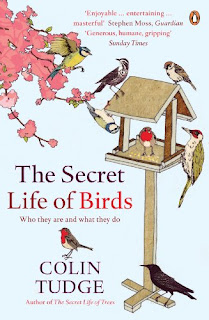 This is a fantastic book to introduce you to its subject. Tudge's easy going, but informed, style is that of a genuine enthusiast whose desire is to develop all his readers to the same level of knowledge. Tudge begins with a couple of seemingly easy questions - what is a bird, and how should they be classified. From these he takes the reader through the complexities of groups and species, through to grappling with more esoteric questions like what is it to be a bird. What we quickly learn with is that birds are infinitely more complex than they seem at first. These are more than just flying animals that eat and lay eggs, these are creatures with complex social lives, the ability to learn and comprehend their surroundings and a huge variety of ways of living. For instance, birds are able to learn about their surroundings and make decisions based on how their environment changes. For instance, take the Collared Flycatcher:

In one field experiment, scientists, being scientists, added more eggs to Collared Flycatcher nests in one area, and in a neighbouring area they reduced the number of eggs in the various nests, and the next year mos males turned up in the territory that had been given more eggs. Once more we see that birds can be aware of their environments; they know what they are doing and build their knowledge season by season throughout their lives.

Key to understanding the enormous variety of bird life on our planet is how these animals evolved. Tudge takes us from the time of the dinosaurs onward, showing how different aspects of bird life - feathers, song, brain and so on - would have evolved. One of the most amazing examples of this is the parasitic behaviour of the European Cuckoo which has evolved in a way that is, surprisingly, often of use to the other species that are lose their eggs when the Cuckoo lays its eggs in their nests.


Once the parasitism of one species on another becomes habitual, an arms race would develop between parasite and host. As the centuries pass the parasites mimic the eggs of their hosts more and more accurately, while the hosts become more and more adept at detecting the minute differences o that the parasites need to be more and more accurate. Eventually we reach the fine-tuned versatility of the European Cuckoo - to which its hosts have yet to mount a convincing defence.... But the relationship... in which the hosts can apparently discriminate foreign eggs pretty well, but sometimes choose not to- adds yet another layer of subtlety.

One final point which I found fascinating. Birds superficially seem to offer a classic example in nature of the family unit consisting of two adults and babies. Yet there seems an infinite array of different ways of bringing up baby birds in nature. From the parasitism of the European cuckoo to the sharing of eggs, to the species that move eggs into different nests and have multiple partners (both female and male birds breeding with others). All human life, so to speak, is here.

Tudge's final chapter ruminates on the threats to bird biodiversity. He shows how bird life is intrinsically part of wider networks, relying on other animals, plants and birds. Destruction of individual species can undermine wider eco-systems. Sadly, if anything, the trends he outlines are far worse now then when the book was published in 2009.

My only criticism of the book is that the detailed "cast list" of birds, dividing them into different orders was overlong, though Tudge skilfully keeps the reader attentive by giving them morsals of fascinating and sometimes hilarious titbits about different examples. For the reader with a passing interest in birds, or the more serious watcher, this book has a lot. Read it with an internet connection so that you can look up each amazing creature and marvel at the wonder of evolution, and, then go outside. You'll see birds with new eyes.

Tudge - Good Food for Everyone Forever


Posted by Resolute Reader at 4:42 pm