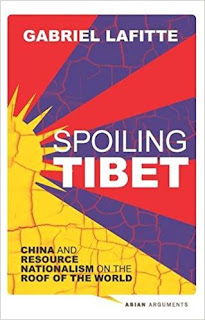 Since ancient times people have known that Tibet is an area rich in mineral resources. As China's economy continues to expand at an unprecedented rate, there are greedy eyes looking at the gold, chromium and copper in Tibetan plateau in the hope of making a swift, and large, profit.

Gabriel Lafitte's new book looks at what this means for the Tibetan people and their environment. Unsurprisingly given the disdain with which China has treated the region for decades, the prospects are grim. That they aren't worse is not out of benevolence from the Chinese state, but because most of the resources can be accessed cheaper and easier from abroad. Tibet's remoteness, its underdevelopment and the fact that some resources are simply not as rich as in other places means that investors look elsewhere first. That said, there are major industries moving into the region, and with them comes repression, environmental destruction and undermining of local communities.

Into this context Lafitte puts Tibet's history. In particular he notes that Tibet is not a barren, peopleless area. In fact the mainly nomadic population has created a "cultural landscape" shaped by centuries of habitation. All this is under threat from the Chinese state's desire to access raw materials.

None of this takes place without resistance. It has been widely acknowledged that there are thousands of "mass events" every year across China protesting environmental impacts of industrialisation, or the destruction of communities etc. Tibet is not immune from this, and Lafitte points out that despite the brutal behaviour of authorities and draconian punishments, "Tibetan communities  have had some success in resisting mining, especially when miners were based far away and had not local protectors". Lafitte continues by arguing that as "national mining corporations" are coming to dominate production in Tibet, the people are "losing the capacity to delay or fend off any longer the party-state's plans for Tibet.

This trend, away from small scale mining, towards "state-owned and private corporations" systematic exploitation certainly does hamper ability to resist, but I am not sure its as bleak as the author makes out. After all, Tibet's movements have managed to put the spanner in Chinese plans before and I am always wary of commentators who argue that resistance won't be successful because of this or that change.

The best parts of Lafitte's book are where he highlights the enormous destructive power of mining and the way that this is central to an economic strategy by the Chinese state. The massive economic investment that is being made to support industrial plans for Tibet - whether its the building of railways and electrical grids, or the diversion of rivers for hydro-power - is truly staggering. Yet Tibet's resources, are but small change in China's insatiable demand for energy and material.

Sadly the book is undermined for me by Lafitte's theoretical framework which begins from the Tibetan people's spirituality. While there is no doubt that their Buddhist beliefs inspire a particular world view as well as resistance to the destruction of their communities, in and of itself it is a limited way to understand the motivations of Chinese State Capitalism. It is not enough to say that "Tibet should be seen through Tibetan eyes, as a land conducive to material comfort and ease" without also understanding that this is true of many other places that capitalism has destroyed in its hunt for profit. This is not to downplay the awfulness of what has and is happening to the Tibetan people; but to seek an alternative way of understanding capitalism and what it does to the planet.

Sadly, Lafitte's conclusion is extremely week. Stopping the destruction of Tibet's environment and the wider planet will require challenging the priorities of Chinese capitalism. It won't be enough for readers to choose a "mobile phone, computer or car [that] is not made in China from Tibetan metals". It's going to take mass mobilisations of workers, peasants and the Tibetan population to stop this environmental destruction, not western consumerism.