Roger Hutchinson - Martyrs: Glendale and the Revolution in Skye 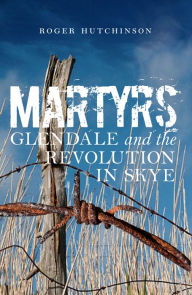 Karl Marx wrote at length about the nature of capitalism. But he also described capitalism's birth "dripping in blood". In Capital, he described how, in order for capitalism to develop, it first had to destroy the historic relationship between people and the land. He wrote:

In Britain, the Enclosures and the Highland Clearances are bywords for the violence and destruction of entire communities as land was repurposed in the interests of profit. What is less well known is that rural communities frequently fought back, and in the case of Scotland, where the Highland Clearances took place in a later era than the bulk of the English enclosures, this resistance had a major impact - forcing government intervention and eventually legislation that gave crofters more rights than they ever had. While this was too late for thousands who had been forced from their homes, sent over-seas or made to work in the factories of Glasgow, as Roger Hutchinson's recent book shows, the resistance meant that thousands of crofters were able to live in safer and more secure circumstances.

Hutchinson's book focuses on one amazing story of resistance in the 1880s, that of the community in Glendale in the western most part of the Isle of Skye who through prolonged rent strikes, physical battles with the police and eventually military occupation eventually forced their landowner to improve conditions and reduce over-crowding. One of the key issues was that families forced from their land elsewhere were causing over-crowding, but rather than blame these people, the Glendale crofters turned their wrath on the landowner.

The solidarity and unity of the community in the face of fierce repression is inspiring. Hutchinson notes that


The communal nature of their daily lives - the work at the peats, at fishing at fathering and shearing - had taught them since childhood to act together, to put aside petty individual differences in the interest of an essential common cause.

But those on rent strike were also not prepared to let anyone break their unity. Acting, as Hutchinson says with the "rough discipline of a revolutionary cell", they wrote in a notice posted in the Post Office


Any one of the tenants at Skinidin who will pay the rent, not only that his House and Property will be destroyed, but his life will be taken away or anyone who will begin backsliding.

The same notice informed the landlord that his animals must be removed from what was seen as communal land that could be used by the crofters, "at Whitsunday punctually, if not, they will be driven off with full force".

So strong was the movement that Glendale effectively became a no-go area for representatives of the law. The men and women of Glendale drove off fifty police officers under Sherrif Ivory, a man who never forgave them for his humiliation, with stones and the contents of chamber pots and prompted a Glasgow newspaper to publish a satirical poem based on Tennyson,

Missiles to the right of them,
Brickbats to the left of them,
Old wives behind them
Volleyed and floundered.
Stormed at with stone and shell -
Whilst only Ivory fell -
They that had fought so well
Broke thro' the Island Host
Back from the mouth of - well!
All that was left of them -
All the half-hundred

With Glendale effectively declaring autonomy from Britain, the government had to act. Leading figures, including John MacPherson who became one of the most important and eloquent spokespersons for the Crofters, were imprisoned though their court appearances helped them spread their message. The Glendale rent-strikers received support and solidarity from communities across Scotland and the eventual deployment of hundreds of marines and armed naval ratings (on two occasions) must rank as one of the most ridiculous and inappropriate uses of military power in an era in which the British government was not afraid to use over-whelming force against unarmed opponents.

The struggle was eventually victorious and was instrumental in forcing the government to introduce a Royal Commission into the situation. When this proved limited in its recommendations and the Glendale crofters found that their circumstances did not improve, they continued their fight. The Crofters Act failed to redistribute land as the now Highlands wide movement demanded. The Radical Crofters Party MPs who were elected to Parliament on the back of this movement refused to vote for it. But the Act did give enough to mean that the Glendale strikers were proved to have been paying too much rent and eventually, the land they were fighting for was nationalised and sold to the Glendale community.

Hutchinson neatly brings the story up to date, putting the Glendale victory into the context of other, more modern legislation aimed at supporting the Crofting communities of Northern Scotland. He doesn't however romanticise the period, or the lifestyle. This was a hard, physically demanding and poverty stricken life. But the Crofters were not weak willed, passive victims, they were men and women whose strong communities were frequently prepared to resist those sent against them by the greedy landlords. This wonderful rich history of the Glendale Martyrs and their resistance is a must read for anyone trying to understand Scottish history, as well as the larger changes that have taken place in British rural communities.

Hutchinson - The Soap Man
Richards - The Highland Clearances
Cameron - The Ballad and the Plough
Posted by Resolute Reader at 5:57 pm