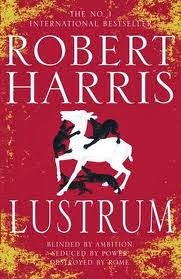 Volume two of Robert Harris' trilogy about ancient Rome's most famous senator, lawyer and orator is a different beast to the first novel. I remember enjoying the first because it evoked a real sense of Rome - the sights, smells, over-crowding and general atmosphere of an ancient city. Instead, volume two, concentrates on the relationships in the senate and between the most important figures


Cicero has grown self-confident and wealthy. The story begins with him helping to finish off the conspiracy of Cataline. His rhetorical skills, and cunning ability to play individuals off against each other, as well as an avowed commitment to the Republic allow Cicero to come out on top. But in doing so, he lays the seeds for his future demise.

As in the first volume the mass of the population rarely make an appearance. Usually they are there to cheer one or other of the main characters. But I did like the way that Harris uses Cicero's greed to demonstrate how ordinary Roman's could still dominate thier rulers. As Cicero glories in his victory, he over-reaches himself, purchasing an elaborate mansion on a hill overlooking the forum. Cicero is glad to be higher up and in a better place than his arch rival, Caesar. But his enemies can use the easily visible mansion as a rhetorical point. Now Cicero is classed as the wannabe dictator, gazing down on the city from on high. The seed is set for future collapse as Cicero's networks unwind.

Sadly volume three is yet to be written in this enjoyable trilogy. The outcome is well known, but Harris has a story-tellers ability to make it all quite new.