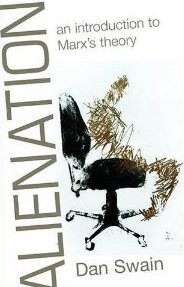 Karl Marx's ideas of alienation are often portrayed as being overly complex. Yet they are a rich and fascinating examination of the way that human lives are distorted by the capitalist society that we live in. Dan Swain's new book is a short, but never superficial examination of this part of Marx's work, it is a brilliant introduction to the subject and deserves a wide readership, particularly amongst people who are getting to grips with Marxist thought.

Swain locates his explanation of Marx's theories firstly in those that had come before. He describes how, out of the enlightenment, thinkers like Rousseau and later others like Hegel and Feuerbach were trying to get to grips with the place of humans within the natural world. Their criticisms of the established order of feudalism looked toward a new, more rational explanation of the world.

Marx built on their insights, but he did so critically. He located his understanding of alienation in a materialist explanation of the way that humans interact with the natural world. But he also argued that the alienation that people experience depends on their position in human society. Swain quotes Marx:

"The propertied class and the class of the proletariat present the same human self-estrangement. But the former class feels at ease and strengthened in this self-estrangement, it recognises estrangement as its own power and has in it the semblance of a human".

By locating the experience of alienation in a class society, Marx gets to the bottom of the question. Since, for Marx, what makes us human is our ability to labour on nature, to transform the natural world in our interest, alienation becomes the way that our labour is distorted and taken from us. The way that we lose control over it, the way that the products of our labour are prizes that we cannot have.

I particularly liked how Swain illustrates these theoretical ideas with practical and concrete examples. Drawing on examples from Apple factories and car plants, to working lives in call centres, he shows how people become merely extensions of the machines they work. This has practical consequences. Swain shows how there is evidence that lack of control over the working environmental is one of the biggest determining factors in physical and mental health. He quotes one report that argues "giving employees more variety in tasks and a stronger say in decisions about work may decrease the risk of coronary heart disease."

In one of the strongest chapters in the book, Swain shows how, with the growing environmental crisis, the alienation inherent in capitalism is "fast becoming one of the most important forms of alienation". The way in which the separation between humans and nature is increased under capitalism, as the natural world becomes something to be used for the production process, is directly linked to environmental crises. Swain illustrates this by pointing out that one of the proposed solutions to climate change, emissions trading schemes, is one of the clearest examples of commodity fetishism. Under capitalism, even molecules of gases are considered commodities to be sold.

As I said, this is a brilliant introduction to Marx's work on alienation. It deserves to be read widely and, it doesn't locate the question in an academic debate. Perhaps because of this, Swain is able to conclude on an optimistic note. He demonstrates how many of the problems he discusses break down during revolutionary changes. He quotes an Egyptian revolutionary speaking of the events of 2011, "Freedom for the worker did not only mean freedom to vote or freedom of expression, it also meant freedom from hunger and the constant threat of unemployment... Dignity was a meaningless notion unless it meant an end to poverty and need."

Marx's thoughts illuminate better the world around us. Swain explains them with clarity and straightforward language. He also updates them for the 21st century world of work, but shows how very little has changed from the early days of capitalism. I would recommend this introduction highly.
Posted by Resolute Reader at 7:24 pm

I agree wholeheartedly with your excellent review. I found that each chapter in this very brief book contained more useful information than books three times its width. That being said, it's not a light read. I found myself re-reading some chapters as I continued to process what I learned.

Certainly easier to understand than Capital!