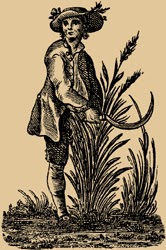 The period covered by this work of history is a period which saw an inexorable change to country life. From the late 18th century onwards, Britain moved from being an economy dominated by agriculture, to one where industry and the urban life was the major feature.

As late as 1811, agriculture made up a third of British GDP. As population rose dramatically during this period, the agricultural population peaked in 1851 at around 2 million active farm labourers. This was the first year were the urban population was larger than that of rural areas. It marked a moment of change for the country.

Pamela Horn's book charts this transformation. She does so with a sympathetic eye on the people who worked the land, usually for other people, often for a pittance of money or food. She shows how then, as now, economic changes impacted the people at the bottom of society and during the booms, they benefited the least.

But Horn has a knack for demonstrating how change occurs. There is no great inevitable transformation of agriculture for her. Nor does the increased mechanisation lead simply to smaller rural populations. Though these factors are important. She sees the transformation of the countryside as taking place as a result of numerous factors, which interact with each other in ways that start to bring great change. However alongside this, is a determined effort by the ruling class of the time to reshape the countryside.

The enclosure of land helped dramatically improve crop yields. Yet it could only take place with Acts of Parliament and their forceable imposition by armed bodies of men.Where resistance did take place, it slowed the transformation of the land and delayed the impoverishment of those who previously worked the land. The deliberate reshaping of the countryside in the interest of a tiny minority is a theme that runs in the background of much of the book. Horn demonstrates some of this through the way that gaming laws were viciously imposed from the 1770s onward, by a parliament dominated by wealthy landowners. The introduction of stringent laws against poaching, helped to protect game solely for the use of the landowner, but it was yet another nail in the coffin of a rural life that relied on "nature" being available for use by everyone.

The radical William Cobbet described the legal changes taking place as a move towards a rural society were there were "but two classes of men, masters and abject dependents". One aspect of this changes was the way in which the rich created an ideology were unenclosed land made the poorest lazy. Thus the enclosure process was one of making the poor work harder and be more useful to society.

Horn shows how the introduction of technology did change agricultural practices, but much of this was a more organic process, with new inventions and changes gradually seeping throughout the country. Later, as industrialisation bought more centralised factories to the fore of the capitalist system, this changed, but it often took agricultural societies, or learned farmers to change practises that had taken place for centuries. Rural change is a slow process, the scythe didn't replace the sickle in much of Britain until the mid-part of the 1800s.

Horn's book is packed with facts and statistics. It is of great use to the researcher, as a summary of the changes taking place that form the backdrop to the industrial revolution. To the casual reader it is a fascinating account of a changing world, that fundamentally shaped our own and leaves its imprint on the hedges and fences of the countryside today.
Posted by Resolute Reader at 5:25 pm

Thanks for the review. My ancestors lived in rural Kent for hundreds of years, dying at a ripe old age. Then they they moved to London in the mid-nineteenth century and the death certificates show that for two generations, they died in their early 50s.

I'd love to know more about the forces that drove people to leave a rural 'idyll' for the challenges of urban life, so books like this are most welcome.

It's an interesting question - why did people leave. Horn points out that urban living conditions and wages were on a par, or worse than in the countryside. But she thinks that people often left because there were opportunities for advancement in the cities, unavailable to the rural poor, but also "most important, the social and political pressures of squire and parson were absent". Which is possibly why the "more rural an area was, the more likely it was to suffer a heavy outflow of population".