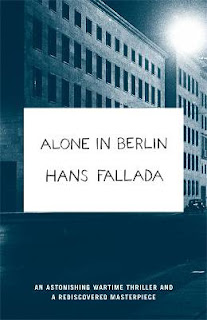 It's difficult to believe that this 1947 novel about life in Berlin under Nazi rule, only made it into print in English in 2009. As no less an authority than Primo Levi commented, “the greatest book ever written about German resistance to the Nazis”.

Our heroes, Otto and Anna Quangel are quiet, unassuming people. At the start of the book, Anna receives a standard letter informing her that her only son has been killed at the front (we presume in the Battle of France). This inspires both of them to gradually take on a campaign of resistance against the Nazi regime in general, and Hitler in particular.

Resistance means many different things. Under a totalitarian regime, with an unprecedented network of spies and snoops, a complex and extensive security apparatus and a reputation for the utmost brutality, open resistance doesn't last long. Otta and Anna's resistance takes a quiet form, but one that nonetheless angers and terrifies the Nazi power structures. Rather simply, they take write cards with anti-war or anti-Nazi slogans. Despite how the Gestapo imagines them, these aren't the writings of Communists, but the anger fuelled rage of two people whose lives are being destroyed by the Fascist regime.

Simple but for the Thousand Year Reich, no hint of feeling against the regime must be allowed to shine through. So the game of cat and mouse begins. The Quangrels drop a postcard a week at first, gradually gaining confidence. Knowing that the state is trying desperately to identify them.

To tell much more of the plot would ruin one of the world's great novels. But what makes it particularly brilliant are the details of life under the Nazis. The way the system rests on the willingness of some to sell their friends and family. The way in which details of the wider, more horrific horrors are leaking out, gradually. The way that many people don't accept the Fascist government, who are on the Gestapo lists simply because they don't conform, or spoke out once in public.

My own family lived in Berlin at this time. My grandfather, a baker by trade refused to Sieg Heil once after a job interview. Something that almost lost him the job, but could certainly have landed him in far deeper water should someone have complained to the right person. It seems a minor gesture now, meaningless when compared to the atrocities of Treblinka, Dachau or Auschwitz. But the story was told with pride and honour by relatives who knew what it was like to be watched by men who would torture you at a moments notice.

It's this atmosphere that Fallada captures with such brilliance. The end of the novel isn't easy, but in many ways it is full of hope. Even in the darkest of hours, there are those who refuse to bow down.
Posted by Resolute Reader at 8:11 pm

Nice review! I agree, the atmosphere of fear that reigned in Germany is excellently described by Fallada. More on this here (spoiler alert): http://hansfallada.com/works/going-alone-against-berlin/

That link doesn't work for me, try this one instead

I really should get this. I'd heard of it before, and your review does tempt me further.

Nice cover too, I saw this at the weekend with a much more generic one (it's a pet hate of mine, generic covers), I'll have to track down your version.

Judging books by covers, how shallow I am...