John Bellamy Foster – The Vulnerable Planet; A Short Economic History of the Environment 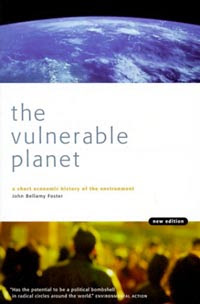 Most famous perhaps for his examination of Karl Marx's understanding of nature and capitalism, in his book “Marx’s Ecology”, this older book was John Bellamy Foster’s first venture into the world of environmentalism. It is short – barely 150 pages in length, but contains a succinct analysis of both the history of the human race’s relationship with the environment and the Marxist understanding of the relationship between nature and society.

Foster’s basic thesis is that humans have always exploited their surrounding nature. In some cases, in the past, this has led to human societies undermining the very basis of their existence. This is important for Foster, because he argues that while there is a difference between the exploitation of nature under capitalism, it is important not to fall for the “mainstream conception….. which traces all environmental problems, other than those linked to demographic influences, to the technologhy of production that emerged with the Industrial Revolution, inventing a gloried past characterized by ecological harmony”.

For Foster, drawing on the work of Marx and Engels, humans exploit the nature around them as the basis of their existence. Different historical socities have of course done this in many different ways. But this process becomes accelerated with the development of industrial capitalism.

The industrial revolution, the development of capitalism and the expansion of capitalism to every corner of the world, as well as the imperialistic wars that have been fought by various national powers have all associated environmental and ecological consequences. The destruction of the flora and fauna of the America’s by the settlers that arrived there. The oil spills and fires associated with the First Gulf War, the terrible pollution associated with the creation and rapid expansion of industrial cities are all good examples. Foster spends some time looking at the terrible health problems in the world’s first industrial city Manchester – he quotes Tocqueville

“From this foul drain the greatest stream of human industry flows out to fertilise the whole world. From this filthy sewer pure gold flows. Here humanity attains its most complete development and its most brutish, here civilisation works its miracles and civilised man is turned almost into savage.”

This can of course be compared to the environmental destruction caused by the rapid expansion of modern Chinese cities, or as Foster points out, that caused by the industrialisation of East Europe and Soviet Russia during the cold war – he describes one city in the Urals, which was so polluted that the only cause of death was cancer.

For Foster, environmental destruction is part and parcel of capitalism. Capitalism’s drive for profit, it’s short termism and its externalisation of nature from its calculations of profit and lose are the basis of the environmental catastrophe we face. Attempts to change this are always subverted or undermined by those whose interests are linked to maximising profits. Foster points out how historically there have also been countervailing strategies – those that campaigned for national parks (or local ones) in the USA in the later decades of the 19th Century for instance. But the author concludes that these are only really short term victories. In his 1999 afterword he writes

“environmental history is not simply a product of technological or demographic change; rather it is inseparable from, even subordinate to, the way we organize out social relations. The environmental crisis is a crisis of society in the fullest sense. It signals the fact that a one-sided development of human productive powers without a commensurate change in the social relations by which we govern society spells social and ecological disaster.”

His conclusion is very stark, without social revolution, capitalism will continue to rape and pillage the world’s natural resources. This isn’t a process that can continue indefinitely and there is a matter of urgency about the need to hasten the end of an economic system that threatens the very planet we live on.