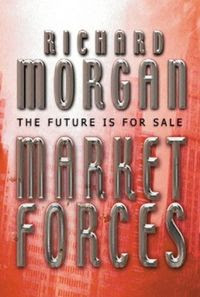 (*) There's a neat little joke in the novel, when a night-club owner repeatadly jokes about the main character's surname being similar to the famous american novelist. Of course, none of the company executives, supposedly cleverer than the rest of the stupid masses understand the reference.
Posted by Resolute Reader at 7:52 pm

I've just re-read this novel and I think it's a lot better than my original review portrays it. As I said, this novel is set in a world that is a logical extension of our own, where the forces of free market capitalism have wrested control from the governments and corporations determine what happens around the world. Wars, famine, assasination they are now part of the corporate stability. The reason its better than some in a similar genre, is that war on the poorest at home, in the richest nations is also real. The choice that Faulkner faces, whether to stay in the race or save his humanity is an interesting one. What he does makes for a great novel.