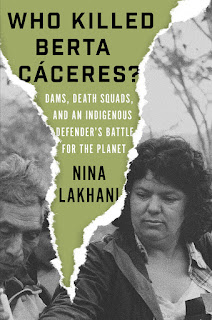 Between 2002 and 2017 some 1,500 activists were killed for their roles in protecting water, land, natural resources and the communities that rely on them. The death rate among environmental activists during the period was higher than for UK soldiers deployed to combat zones. One of those murdered campaigners was Berta Cáceres, a Honduran campaigner who had won the Goldman Environmental prize in 2015. A year later she was shot to death in her own home.

Journalist Nina Lakhani's work has focused on Honduras and activists like Berta Cáceres. This detailed book is the story of the murder and the struggle to for justice. At the end of it, several individuals are found guilty and are imprisoned. But what makes Lakhani's book so important is that the murder (and the role of those convicted) is put into the wider context of Honduran history and current political situation.

In Honduras there is a long tradition of violent repression of those challenging the status quo. As Lakhani explains:


anti-communist fervour was not a Cold War invention. In the first half of the twentieth century, Central America's elite landowning families - who enjoyed absolute economic and political power in their regional fiefdoms - were more that comfortable branding popular uprisings as communist threats. Any sniff of a political, social or labour movement demanding even modest reforms to tackle the stark inequalities was crushed, often brutally, to protect the interests of these elites.

By the 20th century Honduras was very much in the part of US interests, with successive US governments concerned with protecting their sphere of influence from left-wing threats (perceived or imagined). Infamous US ambassador John Negroponte, who served in Honduras from 1981-1985, oversaw military aid "rocketing" from $4m to $77m a year, in what Lakhani calls a "straightforward cash-for-turf deal" whereby the US gained "free rein" over Honduran territory. What is crucial for the story of Cáceres is that this created "a loyal force hooked on American money, equipment, training and ideology: cheaply bought loyalty which the US could count on again and again".

The late 20th century saw the arrival of neo-liberal policies that required the Honduran government, like most other central American nations, to implement all sorts of "reforms" which did nothing for the majority of the population but opened up the landscape to the multinationals. Under the Washington Consensus, Rafael Callejas, Honduran president from 1990-1994,


promoted programmes top break up collective land rights of indigenous and campesino communities in favour of multinational conglomerates. This is what ignited the modern-day land conflicts in Honduras, by putting rural communities opposed to environmentally destructive projects...against the country's elites and international financiers invested in so-called green energy projects.

It was in these struggles that Berta Cáceres became a thorn in the side of the powerful. She came from an activist family and cut her teeth in the armed rebellion of the 1980s. In the early 1990s she helped found the Council of Popular and Indigenous Organisations of Honduras (COPINH). By the 2000s this was a key force organising rural and indigenous communities to oppose dams such as the Agua Zarca in the Lenca territory. In 2009 a coup overthrew President Manuel Zelaya whose minor reforms had irritated sections of the Honduran ruling class. While there is no space to go into this in detail here, it is worth noting that Lakhani shows the failure of the Obama administration to seriously challenge the coup, and specifically Hilary Clinton's pathetic role. The coup"unleashed a tsunami of environmentally destructive 'development' projects as the new regime set about seizing control of resource rich territories."

It is in this context that communities began to resist plans by a Honduran company (with links to international capital) Desarrollos Energéticos, S.A. (DESA) to construct several dams on the Gualcarque River. The river was important as a historic site, a place of work and a source of food and water which irrigated local farms. The dams would destroy communities and agreement had been driven through with no consultation in breach of international law. Cáceres threw herself into organising the movement which threatened to derail the project. She knew, as a result, that her life was in danger. DESA had spies in the movement and community and Honduras had a climate of impunity where murderers were seldom brought to justice. As we have seen activists of any stripe faced violence and murder regularly.

Berta Cáceres was a remarkable woman. In these pages were see a principled fighter for social justice who understood that the struggle to defend the environment was inseparable from the fight against injustice and capitalism. She was not afraid, in a macho environment, to champion the rights of women and the LGBT+ community. As one activist told Lakhani, Cáceres was killed "because they could not allow a woman to get away with endangering their business and threatening their investments... Berta's murder was fundamentally a machista murder". Another of Cáceres friends said "they killed a woman who dared speak out against a patriarchal system, that's why I call it a political femicide".

This book is thus a celebration of Berta Cáceres' life and struggles, as well as a devastating attack on the corruption and violence at the heart of Honudran society. The book, however, makes it clear that this is not simply about Honduras, but is a result of Western Imperialism and the way it commodifies the whole world in the interest of capital. The murder of Cáceres, and thousands of other activists, is one way the interests of imperialism and capital are furthered.

I wanted to finish my review by also highlighting the importance of author Nina Lakhani's work. Her journalism before and after Berta Cáceres' murder made sure that the world knew what had happened. It is in no small part due to Lakhani's reporting that those directly responsible for the killing are in jail. This book goes a long way to exposing the wider forces that made that possible. As a result Lakhani herself has faced very real threats of violence. Consequently her book is also a tribute to the sort of investigative journalism that has always told truth to power. But the last words should belong to Berta Cáceres:


If they kill me, the struggle for justice will go on. The world is more powerful than these criminals.

Galeano - The Open Veins of Latin America
Galeano - Children of the Days: A Calendar of Human History
Gonzalez - In the Red Corner: The Marxism of José Carlos Mariátegui
Gonzalez - The Ebb of the Pink Tide
Klein - The Shock Doctrine
Linebaugh - Stop, Thief! The Commons, Enclosures and Resistance
Morgan & Jukes - Untold: The Daniel Morgan Murder Exposed
Posted by Resolute Reader at 9:11 pm