Charlie Jane Anders - All the Birds in the Sky 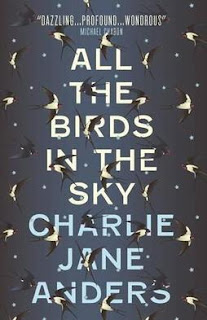 One of my best reads over the Covid period was Charlie Jane Anders' The City in the Middle of the Night so I was really pleased that the first book I was able to buy in an actual bookshop was her earlier book All the Birds in the Sky. I am pleased to say that this was as good a read as City and matched it for innovative thinking, entertainment and radical politics.

The novel begins with a girl and boy in a typical American school. Both are outsiders and, as a result are ostracised and bullied. Patricia is a witch, she discovers that she can speak to birds and Laurence, who becomes her friend is a technology geek, scientist and inventor of the two second time machine. The two second time machine is useless, unless you want to escape bullies, but it is enough to show the outside world that he's got extremely important skills.

As you'll already tell, this means that the book is set in a world that is not quite ours. Magic is real, though controlled by a secret network of witches. Science technology is different to our universe, but only slightly. But, similar to our own time, Patricia and Laurence's world is on the brink of disaster. As adults both Patricia and Laurence take different approaches. Patricia's magical network tries to heal unhappiness. Laurence ends up with a network innovators, headed by the billionaire Milton (modelled on Elon Musk?) who are looking for a technical way to escape Earth.

Telling you more about the story would ruin things. What's important to note though is how Anders handles the relationship between Patricia and Laurence. From their estrangement at school, based on misunderstandings and outside interference to their reunion years later, Anders explores what its is like to be an outsider, to be confused about friends and lovers and trying to understand who you are. Unfortunately Patricia and Laurence are doing all this in the context of the Unravelling of system.

In essence this is a story about friendship, but its also a warning about the dangers of trying to solve the world's crises with simple solutions - both technological and natural. But the world building is wonderful, the characters are brilliantly drawn and the growing environmental and capitalist crisis feels frighteningly real. There's a lot here: engaging entertaining reading, plenty of in-jokes and a clever plot. Great fun.

Anders - The City in the Middle of the Night
Posted by Resolute Reader at 7:17 pm