Mark Roseman - The Villa, The Lake, The Meeting: Wannsee and the Final Solution 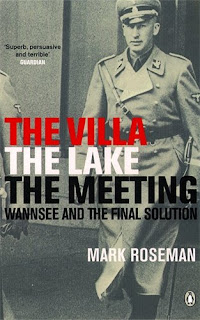 When I was young we had several trips to Berlin to visit family. There we would always look forward to visiting the Wannsee resort, playing on the artificial beach and exploring the woods. Many years later I was horrified to learn that Wannsee was synonymous with the Holocaust.

On the 20 of January 1942 senior figures in the Nazi bureaucracy assembled at a villa in Wannsee. The subject of the conference was the "Final Solution" of the "Jewish Question". The conference itself was relatively small, with 15 delegates representing different sections of the government. Convened by Reinhard Heydrich who reported to Himmler, the conference had the stamp of authority from the highest levels in the Nazi government though, ironically, author Mark Roseman argues we don't clearly know why it was called.

Wannsee would have remained forgotten had it not been that a single copy of the thirty minutes printed after the event would turn up in the post-war investigations into Nazi crimes. These minutes (known as Protocols in German) summarised the event and its conclusions. Some investigators hoped this would be the smoking gun that showed the Nazi machine deciding to embark up on programme of mass murder. But as Roseman explains, that programme had already begun. Instead, the event appears to have been an occasion to discuss the problems that arose from the planned destruction of the Jews in terms of resources, but also - chillingly - to thrash out who in the bureaucracy had ultimate responsibility. It also, as Roseman concludes, was a place where the high-command was informing lower levels of existing decisions:


The Wannsee conference is thus a king of keyhole, through which we can glimpse the emerging Final Solution. It took place at a time when the idea of a reservation had been abandoned, labour scarcities were pressing and when the Nazis may or may not have decided exactly how to eliminate all the Jews. But it is evident that Wannsee is not the place at which the murder decisions themselves es were taken. For the most part, Heydrich was disseminating conclusions drawn elsewhere. On some issues the participants had something to say; for the most part their role was to listen and to nod.

The Wannsee Protocols are published in the book's appendix, though they are easy to find online. It is a awful document to read - their structure is similar to the minutes produced from normal conferences and meetings, but their subject is mass murder. Roseman points out that the language is made up of euphemisms that disguise the real subjects - talk of Jewish "reservations" and "emigration" when the Nazis had already ruled out these strategies. Roseman writes:


The euphemisms were its normal mode of communicating about murder, and will have served here to remind recipients of the language codes they should use. At the same time it was so vital to establish the participants' shared knowledge in the killing programme that this overrode the need for caution. This is why Lammers, Stuckart and others were at such pains after the war to deny having seen the Protocol, to escape from the trap that Heydrich had set them.

But reading the Wannsee Protocol myself I was stunned by how open the language is. It is impossible to read these sentences without seeing a group of men around a conference table discussing mass murder.


Jews fit to work will work their way eastwards constructing roads. Doubtless the large majority will be eliminated by natural causes. Any final remnant that survives will doubtless consist of the most resistant elements. They will have to be dealt with appropriately.

The men having these discussions, and enjoying a brandy afterwards, were just bureaucrats. These were "educated" men, most of whom had doctorates. But almost all of whom had long years in Nazi organisations. These were dedicated fascists, who had spent years advocating the destruction of Jewish people and other undesirables. In addition, Roseman points out that "what is striking is how many people round the table had given direct killing orders or themselves had experience of killing". As a result, "no one arrived at Wannsee with even the faintest intention of speaking up for the Jews".

As mentioned Wannsee was not the moment the Holocaust was agreed. The Holocaust was a process that evolved over time, having its origins in the Nazi genocidal ideology, with its specifics arising from the realities of total war on the Eastern Front, the horrors of Nazi treatment of Jews and the violence of the fascist state. But the Wannsee conference, in Roseman's words, "cleared the way for genocide" by pulling in the fascist bureaucracy behind the plans. Mark Roseman's short book is an important insight into how, once Nazis take power, the machinery exists to turn genocidal fantasy into reality.