George Ewart Evans - Ask the Fellows who Cut the Hay 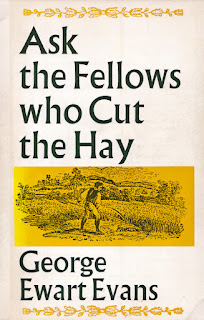 This classic of oral history is both fascinating and entertaining to read. In the late 1940s George Ewart Evans set about recording the memories of the oldest inhabitants of the small village of Blaxhall in Suffolk. In doing so he records both the scale of the transformation of the English countryside at the end of the 19th century and makes a detailed record of rural life and agriculture before it was dominated by machinery and remained dependent on lots of human labour. I did not expect to be enthralled by the detail of how sheep were manually sheered, ale brewed at home and bread baked, but Evans has a knack for showing, through the words of the workers themselves, precisely the forgotten skills that kept agricultural communities going. There is also much insight into the nature of work itself, beyond the labour and skills:


After watching a furrow drawing or a ploughing match one has the feeling that the most cogent reason is rarely stated. To the ploughman the straight furrow is an end in itself, calling for all a man's skill, a king of quest after the mathematically unattainable: skill and craft carried to the point where the straight furrow becomes utility's tribute to art. The ploughman aims at a straight furrow because it looks right; and because it gives him the craftsman's satisfaction of a self-set standard; of doing a job as he feels it should be done, without need of praise except his own self's approval.

But in case the author and myself are accused of romanticising this labour, Evans himself cautions against this trap. In his chapter on the harvest, he says:


If, however, all that has already been stated about threshing gives the impression that there was something colourful or romantic about using the flail, we have the testimony of an old Suffolk farm-worker, who is still living, to disprove it. He was paid at the rate of 3s. a coomb for threshing; and he had no two thoughts about it: 'Threshing was real, downright slavery.'

Similarly there are many accounts of the reality of low wages and rural poverty. One of Ewart's sources George Messenger said:


My father brought up seven children on ten shillings a week. It was four rounds of bread each in a day - no more. And often it was a pinch of salt in a kittle of hot water and that was poured on the bread, and my mother would say "C'mon, there's a sop for you!" Kittle-broth we used to call it.

One of the joys of the book is the emphasis on the local dialect, and its interesting to note how some of this manifests today. For instance, the local pub in Blaxhall today (according to Google Maps) is called the Ship and has a picture of a viking type craft on its sign. According to Ewart the Ship had a plain sign in his day, because it was ambiguous whether the name refereed to a boat or the dialect word for sheep. Google maps provides another interesting diversion for readers - the village map in the front pages of this 1956 map shows little change to boundaries or roads, or even buildings over 60 years later.

There is little detail of organised resistance against poverty and inequality, though Ewart does say that many locals were deported to the convict settlements for poaching and smuggling, and some during the same period as the Tolpuddle Martyrs for "roughly the same reasons". Suffolk would be close to centres of agricultural trade unionism during some of the 20th century so it would be interesting to know more. But most "resistance" that reaches Ewart is through passive or secondary sources - local support/participation for poaching or smuggling. Some of these accounts are as fascinating as the sections on sheep, harvesting and village life. All in all this is a classic work of rural oral history.