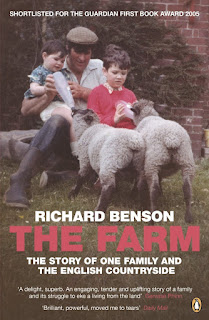 Picking up The Farm I will admit that I thought it would be a rather annoying romanticised description of life in the countryside. But Richard Benson's book turned out to be an insightful and entertaining  history of recent changes in rural England. Benson is not a farmer, though he comes from a family of farmers. While working in London at a job on a fashion magazine he gets a phone call from his parents back on the Yorkshire farm he grew up on. They're selling up. The initial shock to the system leads to the first of many returns home that culminate with the family farm being sold to a property developer. While telling this story Benson simultaneously tells the story of growing up on the farm and the changes to the English countryside.

Benson has no head for farming. He can't drive a tractor in a straight line, never has the right tool ready for his dad and constantly struggles with the animals. But he is intimately tied to land that generations of his family had worked. But the industry and the farm is changing. While a boy his parents had already sold off the land used for growing crops to focus on pigs. Then they found, alongside most of their neighbours, that they couldn't compete with cheap meat from the continent. Today the middle classes love some locally reared, organic pork. In the 1990s it was all about the cheapest possible cuts - or rather the massive profits that supermarkets and big agriculture could make.

The economic downturn as British agriculture is neglected by successive governments, means unemployment, drinking and drugs become a feature of life in rural communities. So are suicides. Benson deals sensitively on the question of mental health, including that of his father. A childhood friend commits suicide and you get a sense of the anger and frustration in the community at the inability to fight the destruction of a way of life. Interestingly, and contrary to much perceived wisdom, these farmers aren't right wing Thatcherites - there's a charming bit when Benson's mother defends the striking miners.

Benson survives by running away to study literature and become a writer. His brother remains to look after the pigs and work on other peoples land; land that was once owned by the family. When the farm goes his brother can continue with labouring, but you do wonder what the long term future holds. Its a question that many more British farmers must be asking in 2020 as economic uncertainty rises.

Benson's writing is fluid and entertaining. Among the tragedy there is real humour and warmth such as can only come out of a close knit community. There's no way that the middle-class urbanites who buy up the former farm buildings which have been converted into luxury homes will ever know that feeling.

Clutterbuck - Bittersweet Brexit
Rebanks - The Shepherd's Life: A Tale of the Lake District
Posted by Resolute Reader at 8:51 pm