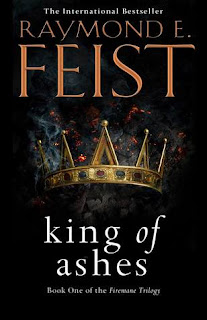 King of Ashes is the first in a new trilogy by Raymond E. Feist, an author known for his long, intricate and interrelated fantasy book series. While certainly readable, the first volume of the Firemane trilogy felt extremely generic to me. The book begins with an appropriate fantasy map (which, rather annoyingly, doesn't include most of the places mention in the text) and opens with the aftermath of a battle. Or rather a massacre. Despite centuries of peace, the various kingdoms in the lands of Garn have broken out in war. Subterfuge has led to King Firemane's forces being smashed through betrayal and all of the ruling family murdered. All except a small baby, who is spirited away and brought to live on the island of Coaltachin a kingdom of Garn-wide mafiosi. Where he is named Hatushaly or Hatu for short.

Parallel stories follow different groups of people, particularly the talented smith who was apprenticed to the smith who was bound to the baron who saved Hatu. All of this is extremely readable, but Feist takes an age to tell a story, or describe something which partly explains the length of this work. There are long detailed accounts of how smith's do various technical things or explanations of the specialist training given to the young men and women of Coaltachin to ensure that they both are skilled at fighting, travelling, survival and spying and prepared to do these things unquestioningly in the service of their kingdom.

This latter aspect is particularly difficult as Feist, presumably ignoring any contemporary attempts to challenge some of the more traditional tropes of fantasy literature, has Hatu's best friend Hava (a young woman of his age) attend a camp to teach her the arts of seduction. Rather crudely Feist dwells on some of the more lascivious aspects of this training. In fact crude sexuality is a big part of the book as Feist struggles to describe Hatu and Hava's coming of age in ways that don't feel like a teenager's diary.

These problems however are only part of the bigger issue I had with the novel. Feist is so concerned with his world building and presumably laying out plot lines for the later novels, that 500 pages effectively do nothing but build up to the point when various of Garn's powers have laid out their plans and Hatu has learnt his true heritage. We've also had various semi-magical beasts and hints and wider changes in Garn.

Readers who like long, intricate fantasy worlds and can ignore (or prefer) fantasy themes and depictions (especially of women) that feel more 1970s than 21st century, will probably devour this book and the rest of the trilogy. I am afraid I won't be reading past volume one.
Posted by Resolute Reader at 5:17 pm