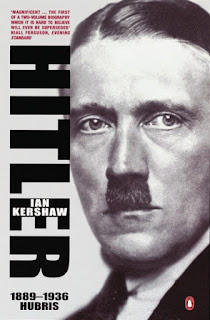 Why read a two volume, nearly two thousand page biography of one of the 20th century's most appalling dictators? The answer lies in who Adolf Hitler was. He was a dictator, but he was also, as Ian Kershaw's biography ably shows, a shrewd organiser who was able to build a movement that could take power and install a fascist leader. Thus, understanding Hitler is in no small part of importance for trying to stop this reoccurring.

The two volume format works well for two clear phases in Hitler's life. Whether these are the only two phases I will return to in my discussion of volume two. But certainly the first half consisting of Hitler's youth, army service followed by the route to power neatly fits a first book. The longer second book focuses almost entirely on World War Two. But the two books cannot really be separated. This is not simply because they tell the story of a single life. But because the ideas that Hitler developed early were at the core of his thought and action for his whole life. These included but weren't limited to extreme antisemitism, nationalism, a pathological hatred of the left, belief in a "stab in the back" of Germany following World War One, and the desire for a strong, dictatorial leadership for Germany. To his dying day he clung to this fascist "worldview". In fact, key, flawed, decisions made between 1939 and 1945 arose directly from the Nazi ideas that Hitler developed in his 20s and 30s.

But I get ahead of myself. Readers picking up Kerhsaw's book for information on Hitler's personal life will find them sorely missing. But this is not the fault of the biographer. Hitler had very little personal life. Even in his early life he comes across as lazy, quick to blame others for his own failings, unable to make friends and obsessed with his own intelligence. It's easy to draw parallels between this characteristics and Hitler's later behaviour. To do so would be massively over simplifying things. Instead Kershaw shows how Hitler's world-view and the fascist movements he helped create arose out of two key things. Firstly the long tradition of far-right, nationalistic and antisemitic organisation that existed in Austria and German. Hitler's early engagement with these ideas and the organisations that preceded him, gave him a quick entry to fascist organisation. Of most important though was World War One. As Kershaw says:


On the eve of the First World War, Germany was certainly a state with some unattractive features - among them those of the unbalanced character sitting on the Imperial throne. But nothing in its development predetermined the path to the Third Reich. What happened under Hitler was not presaged in Imperial Germany. It is unimaginable without the experience of the First World War and what followed it.

What followed was economic crisis and revolution. In a hospital in 1918 Hitler watched the revolutionary events with horror. Kershaw says that his "entire political activist was driven by the trauma of 1918- aimed at expunging the defeat and revolution which betrayed all that he had believed in, and eliminating those he helped responsible."

While we know Hitler as the beer-hall agitator, he (and others on the right) discovered Hitler's speaking talents working for the Reichswehr (the German counter-revolutionary defence force) that organised against the left in the aftermath of World War One. It was this that "turned Hitler into a propagandist". Here he developed the ideas that would crystallise into the Nazi worldview. Kerhsaw:


At first Hitler's antisemitic tirades were invariable linked to anti-capitalism and attacks on 'Jewish' war profiteers and racketeers, whom he blamed for exploiting the German people and causing the loss of the war and the German war dead... There was no link with Marxism or Bolshevism at this stage. Contrary to what is sometimes claimed Hitler's antisemitism was not prompted by his anti-Bolshevism; it long predated it.

This combination of antisemitism and anti-capitalism allowed Hitler to appeal to layers of the masses who had been left devastated by the economic crisis following World War One. Rather than blaming the capitalist system itself though, Hitler's antisemitism played on the racist conspiratorial view that it was the Jews who had caused economic crisis and allowed Germany's defeat. But for Hitler ideology was not an abstract question. It mattered little that his ideas held little internal coherence, they were important because they were tools to mobilise people. The people could be shaped into a movement that would lead to the fascist seizure of power.

It is worth noting Kershaw's point that the iddea of Hitler as Fuhrer of Germany (and indeed the Nazi party) did not originate fully formed in his head in 1918. It arose out of the experience of the struggle to build Nazi organisation and Hitler's increasing obsession with his own self importance.

Much of Kerhsaw's book charts the rise to power of the Nazis. Here the book is full of detail. From small details about the organisation of the early Nazi party, including Hitler's seizure of the leadership to the Beerhall Putsch that temporarily set his movement back. The final section details the machinations of Hitler in the last years of the Weimar Republic, the massive election campaigns, the innovative use of propaganda and the hard nosed negotiations that eventually got him chosen as Chancellor.

In part Hitler was able to achieve this because of the close links he began to increasingly make between Jews and Marxism. Kershaw explains that in court for his role in the Putsch, Hitler used the platform to declare that [Kershaw's words] "The Nazi movement knew only one enemy... the mortal enemy of the whole of mankind: Marxism. There was no mention of the Jews." As Kershaw explains "Marxism and the Jew were synonymous in Hitler's mind". It is this that is key to understanding why many in the German ruling class were prepared to give Hitler power.

But on the eve of success Hitler nearly failed. What Kershaw does brilliantly is to place the story of the rise of the Nazis into wider contexts. Hitler was lucky as well as being a shrewd organiser of the mass fascist party. In the late 1920s and early 1930s the Nazis increased their vote share extraordinarily rapidly rising on the back of economic and political crisis, using antisemitism and anticommunist hysteria to attract large sections of the population. But the party was, on occasion, internally divided and crisis prone. In the last election before his victory, the Nazi vote was declining and Hitler faced a crisis in the organisation that nearly split it. Had this happened, Kershaw argues, Hitler would not have come to power.

The point, though I don't think that Kershaw makes enough of it, is that Hitler could have been stopped right up until the last moment. The near splitting of the Nazi party during the Strasser crisis, was a sign that had united organisation existed that was prepared to challenge the Nazis on the streets, on the ballot and in the workplace existed, it could have broken Hitler. Certainly the experience since 1945 has been that were mass anti-fascist movements been able to pressure emerging fascist movements through counter-protest and propaganda, the splits that follow often set the Nazis back many years.


Democracy surrendered without a fight.... In the final drama, the agrarians and the army were more influential than big business in engineering Hitler's takeover. But big business, also, politically myopic and self-serving, had significantly contributed tot he undermining of democracy which was the necessary prelude to Hitler's success. The masses, too, had played their part in democracy's downfall... Democracy was in a far from healthy state when the Depression struck Germany. And in the course of the Depression, the masses deserted democracy in their droves... The working class was cowed and broken by the Depression, its organisations enfeebled and powerless. But the ruling groups did not have the mass support to maximise their ascendancy and destroy once and for all the power of organised labour. Hitler was brought in to do the job for them. That he might do more than this, that he might outlast all predictions and expand his own power immensely and at their own expense, either did not occur to them, or was regarded as an exceedingly unlikely outcome.

The working class was broken. But its political parties still retained the loyalty of millions of voters. Had the Communists and Social Democrats united to stop Hitler, the story might have been very different. The ruling class certainly didn't think Hitler would last long. But they were, in many cases sympathetic to his ideas. It was a frightening combination.

The great strength of this volume is that Ian Kershaw places the rise of Hitler in the context of the historical moments. Those readers expecting to learn that the origin of the Holocaust and World War Two lay in some combination of Hitler's personality or the nature of German people will be disappointing. But understanding Hitler as both a product of his times and someone who shaped the situation through the mass Nazi party is much more useful.

Hitler could have been stopped. That's the conclusion that should be drawn from this book. The story doesn't end in volume one though in 1933. It shows the consolidation of power through his destruction of his own enemies (real and perceived) in the Night of the Long Knives, the defeat of the left and the trade unions, and the emergence of the Nazi state. It also show how the steps towards the Holocaust began. Here the development of trhe Fuhrer state on the back of a network of millions of members of the Nazi party allowed for a myriad of small bureacrats and activists to "work towards the Fuhrer". These individuals had no specific instructions, but they too lived inside Hitler's worldview and worked towards the implementation of those ideas. In volume two we see precisely what that meant for millions of Jews, disabled people, gays and lesbians and leftists, as well as the populations of Europe.

Kershaw - Hitler, 1936-1945: Nemesis
Kershaw - To Hell and Back: Europe 1914-1949
Kershaw - The End
Mazower - Hitler's Empire
Sereny - Albert Speer: His Battle with the Truth
Browning - The Origins of the Final Solution
Paxton - The Anatomy of Fascism
Posted by Resolute Reader at 5:37 pm