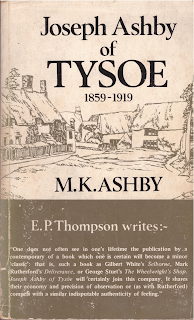 This is one of the classic historical accounts of life in an agricultural community during Queen Victoria's reign. Part biography, part autobiography and part historical study the book focuses on the author's father Joseph Ashby, though it begins with her grandmother Elizabeth and covers some of the experiences of her and her siblings. As such its an unusual book, rich in period detail, which links personal anecdote with historical records.

The book is well known enough that Joseph Ashby's memories are often quoted in other books about the period. Pamela Horn, for instance, uses Ashby's recollections of his time at school in her book on Labouring Life in the Victorian Countryside. On occasion I've seen Joseph Ashby described as an agricultural trade unionist, which I don't think is an apt description. He certainly was someone who was influenced to agricultural trade unionism and saw its great importance in alleviating the poverty of the rural working class. That's not to say he wasn't an activist. He tramped the villages and communities preaching, recording, writing and campaigning for the Liberal Party and was asked, towards the end of his life, to stand as a MP.

Ashby's life in Tysoe is mirrored somewhat by Joseph Arch. In his early life Ashby recalls going to hear a speech by Arch a few weeks after his Warwickshire based agricultural trade union had been launched. Its a wonderful description which I wish I'd had access to when I wrote about Arch's life for the centenary of his death, or for the chapter in Kill all the Gentlemen about agricultural trade unionism. Ashby's eye for detail brings to life what a meeting would have been like - from the intimidating presence of the farmers, to the men collecting names at a table for the union.

Its impossible to separate the life of Joseph Ashby from the time he was living in. Its a period that saw the complete transformation of rural England. By the end of Ashby's life England's economy was well at truely industrial, cars sped through the countryside and the age of the horse was over. Machines had transformed farming and the age of the Workhouse was ended. It was also a time of struggle and reform. Tysoe seems to have mostly escaped the struggles of the union movement - though there were plenty of local politics to be involved in. Ashby, as mentioned, as a Liberal activist. At one time he also travelled around in a horse-drawn van recruiting campaigning for land reform for the "Land Restoration League" a movement "touched by Christian socialism". This time was primarily used by Joseph to make a survey of villages, some of which was used by the German academic Wilhelm Hasbech in his study of the English Agricultural Labourer. The van trip is fascinating, again for the insights into local conditions. In some villages they are given short shift by the local landowners, made to drive on. In others they are welcomed. Trade union branches are setup, sometimes with a sympathetic local clergyman taking up the reigns of the secretary until someone else steps forward.

The clergy play a big role in the book. The Tysoe vicar for much of Joseph's life is a pompous right-winger whose patronising attitudes are very much geared towards maintaining the status quo. Joseph himself breaks with the Church and begins to explore Methodism as a result of the vicar's attacks on the trade union movement. Like Arch, Ashby becomes a chapel preacher and like Arch travels the countryside to speak on Sundays giving him a network of contacts and friends around Warwickshire.

Ashby's mother, Elizabeth, is a fascinating character. Its explicitly written that Joseph's father was the owner of the country house she went to work in as a maid. Becoming pregnant she was sent away and, in a rather moving passage, only appears to have given up hope of connecting Joseph back to his rightful place when he becomes involved in the trade union movement. She seems a formidable woman, surviving the abandonment by Joseph's father, and the death of her first husband to bring up several children and help them to adulthood. She instils in them a love of books and writing. Joseph becomes both an author and a voracious reader. Something that means he doesn't end up labouring in the fields, but is able to earn a living as a surveyor. Eventually Joseph and his wife Hannah own a relatively decent farm, before moving away from the Tysoe area to a 200 acre farm in their last years.

Many readers will enjoy the book for it's description of a rural childhood, or the anecdotes about the history and persons of Tysoe. These are very enjoyable, but there is much more here too - particularly the sense of the changing countryside both economically and politically. Ashby is central to the first local Parish council, which he (and other local radicals) see as a vehicle for bringing about real change. M.K. Ashby reflects this when she concludes:


As I wrote this study I came to feel that he and his mother Elizabeth were the product of a very different community from their contemporary Tysoe, the ill-balanced and wretched village of the early nineteenth century, or the anaemic one of Queen Victoria's later years. They seemed to have come out of a more vigorous community - one still possessed of that first of the things of the spirit - responsibility. It seemed to me that during their time their village was struggling back to an accustomed balance, imperfect but basic.

There's some truth in this of course. But Tysoe was not unique, even if it did have its differences to other villages. The period written about, in fact the whole book, is defined by the gnawing poverty of most peoples lives. Joseph is relatively privileged, but not massively so. By the end of his life his community was suffering less, in part due to the massive changes that had taken place in wider society. The author sees the transformation as arising in large part from the 1832 Reform Act that led to the Poor Laws and the transformation of local authority. It is a sentiment that Joseph would no doubt have agreed with, but it is only half the story. Like Joseph Arch, Ashby never broke from Liberalism, which likely left him remote from the emerging 20th century struggles.

This said this is a really interesting account of rural life and its not surprising that EP Thompson describes it as a classic. Anyone interesting in local Warwickshire history or the struggles of agricultural communities will find it full of fascinating and forgotten material.

Arch - From Ploughtail to Parliament: An Autobiography
Horn - Joseph Arch
Groves - Sharpen the Sickle!
Marlow - The Tolpuddle Martyrs
Jeffery - The Village in Revolt

Howkins - The Death of Rural England
Posted by Resolute Reader at 4:08 pm