Marc Bloch - Feudal Society: The Growth of Ties of Dependence 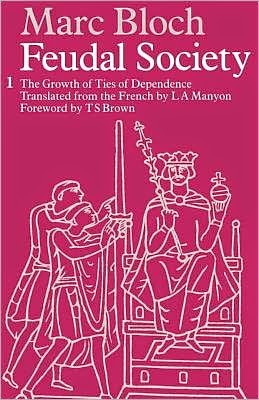 Marc Bloch's classic work of history is one of the great studies of the medieval period. It is not a bedside book, this is a work that requires study and some knowledge of the periods in question, as well as the source material. Nonetheless, even for the non-specialist like myself, there is much to be gained from finishing it, not least an appreciation for Marc Bloch's immense breadth of understanding of the period and his knowledge of the source material. One of the problems for the student of "medieval history" is that it is not really a single period, feudalism was not a stagnant period, as Bloch writes

"It would, moreover, be a grave mistake to treat 'feudal civilization' as being all of one piece chronologically. Engendered no doubt or made possible by the cessation of the last invasions, but first manifesting themselves some generations later, a series of very profound and very widespread changes occurred towards the middle of the eleventh century. No definite break with the past occurred, but the change of direction which, despite inevitable variations in time according to the countries or the phenomena considered, affected in turn all the graphs of social activity."

This is further complicated in that there is a great variety of relationships, social organisation, even distribution of villages as well as different methods of farming across Europe in the period that we usually think of as having a lord living in a central manor ruling over hundreds of serfs on the surrounding land. This was

"an ordering of the scheme of human relations quite different from anything we know today. There was scarcely any remote little place which had not some contacts intermittently though that sort of continuous yet irregular 'Brownian movement' which affected the whole of society. On the other hand, between two inhabited centres quite close to each other the connections were much rarer, the isolation of their inhabitants infinitely greater than would be the case in our own day."

This first volume however is not a description of feudal life, in all its forms and organisation. It is an attempt to understand how the feudal mode of production came about. How the relations between small groups of people in the 10th and 11th centuries developed into the lord and peasant organisation of later centuries.

One major change that Bloch notes in "the man of AD 1200" over his ancestors was that "he was more self-conscious". He was more aware of wider questions, "all at once problems which formerly had been discussed only by a handful of learned men became topics of the day... human affairs were newly emerging as subjects for reflection." In part, this was the result of 'reform' movements among churchmen. But it was also a result of legal codes being worked out more methodically. Every person had to know their place, and their relations with others, in order to ensure that wealth and land were in the hands of those who were supposed to have them. As Bloch writes

"A period of exceptional movement, an age of obscure and profound gestation, is therefore succeeded, from the second half of the twelfth century, by an era in which society tends to organise human relations more strictly to establish more clear-cut divisions between the classes, to obliterate a great many local variations and finally to allow change only at a slower rate."

Bloch breaks this process down. Firstly he examines the customs that existed before the 12th century, the relations between groups of individuals that initially manifest themselves as protection in exchange for support. These ties develop into more complex relationships

"On the one hand, there was the urgent quest for a protector; on the other, there were usurpations of authority, often by violent means. And as notions of weakness and strength are always relative, in many cases the same man occupied a dual role - as a dependent of a more powerful man and a protector of humbler ones. Thus there began to built up a vast system of personal relations whose intersecting threads ran from one level of the social structure to another."


Some of those who sought a protector, "became simply slaves, thereby binding their descendants as well as themselves", but not always, as "to be surrounded with dependents who enjoyed the judicial and military privileges characteristic of free men was, for a chief, in many respects more advantageous than to command only a horde of slaves."

But the development of "classic vassalage" is also mirrored by the development of relations of obligations among those at the top of society. The ruler, lord or king, had to bind close to him those who would support him and maintain his own position. This has its origins in those individuals who fought militarily for a single leader, sharing the spoils of war. As the feudal period develops, these figures then, through the donation of fiefs, are bound to the central figure while also creating wider structures of relations among others, particularly those that work the land.

"The vassal of later times no longer condescended to work with his hands. He was therefore obliged to live on the labour of someone else. When he received an estate, he would expect to find on it tenants who were subject, on the one hand, to the payment of rents and on the other, to labour services which would permit the cultivation of the portion of land generally reserved for direct farming by the master."

Bloch points out that the fief was often land, which produced wealth, but was not permanently owned, it ended when the relationship between the two individuals ended. Either by death, or perhaps by betrayal or promotion. Bloch even shows that individuals could owe allegiance to multiple lords and there are some unusual cases described when two lords went to war, about how the confusion was sorted out.

"From the ninth century onwards, vassalage was regarded as uniting two lives, and consequently it was considered that the 'benefit' or fief was held by the vassal till either his own death or that of his lord"

Ultimately, this relationship grew into the structure that was to dominate the majority of the medieval period,

"In the whole of Europe, in the eleventh and twelfth centuries, the military fief... was transformed into what was to all intents and purposes an hereditary estate. Further more, being regarded as indivisible, it was in many countries transmitted only from eldest son to eldest son."

Much of the book concentrates on changes and developments at the top of society. This is a reflection of the material that has come down to us, rather than any neglect on the part of the author. What is impressive about this book is the authors attention to detail, and his ability to compare and contrast social systems in countries with very different histories. In his conclusion, Bloch argues that the manor, the institution that we think most of when we consider feudalism, has no unique place in the period. It had existed before feudalism, and was to continue to exist afterwards. But

"in the new conditions of life which arose from approximately the ninth century onwards, this ancient method of social organisation was destined not only to extend its grip over a much larger proportion of the population, but also to consolidate to a remarkable degree its own internal structure.... the manor was first and foremost a community of dependents who were by turns protected, commanded and oppressed by their lord to whom many of them were bound by a sort of hereditary link... When the relationships truly characteristic of feudalism fell into decay the manor lived on, but with different characteristics; it became more territorial, more purely economic."

Thus Bloch draws a continuous line from the post Roman, pre-feudal world towards the post-medieval era. His examination of social relations, economic changes and the growth of a stronger state sets the scene for the development of a later capitalist order. His book is a brilliant examination of the world on which the modern world rests and this makes this an essential read for students of the feudal era and the period of transition to capitalism.

Final note: Marc Bloch was an impressive individual. He eventually died as a result of his activity as a member of the French resistance, shot by a fascist firing squad. His writing while complex is also fluid, eloquent and readable, as I hope the quotes above demonstrate. As a result I feel an obligation to mention the translator, L A Manyon who has done an extremely impressive job of creating a very readable English version.

In praise of Marc Bloch's Feudal Society by Jonathan Jarrett
Cohn - In Pursuit of the Millennium
Hilton - Bondmen Made Free
Lacey & Danziger - The Year 1000
Ziegler - The Black Death
Posted by Resolute Reader at 10:40 pm