Charlie Jane Anders - The City in the Middle of the Night 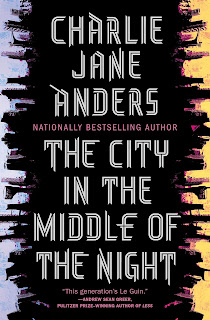 This is a really radical, innovative and interesting science fiction novel, one that stands out of a field that is seeing a resurgence in radical works that bring issues of gender, sexuality, class, racism and class back into the genre.

January is a tidally locked planet, which means that only a thin strip of it is inhabitable between hemispheres that are either frozen solid or boiling hot. On this planet, nature shapes the liveable biosphere in a very restrictive way. Our two main protagonists, Sophie and Bianca grow up in Xiosphant. Here life is as tightly regulated by the city-state. Outside life, indeed even life indoors, is strictly governed by a time cycle that determines when windows shutters open and close. Workers labour to earn one of a dozen currencies that give them access to food and shelter. Its not a worker's paradise, but it has allowed the human colonists of January to survive many generations since they lost contact with their orbiting mothership.

The second city, Argelo, is an other extreme. It's anarchic, free and without constraint. Where Xiosphant locks down personal life in the collective interest Argelo's inhabitants dance and party their way through life. Or so it seems initially. In reality, both cities are havens of poverty and social unrest, except that their masters have learnt to regulate them completely.

Its difficult to read Charlie Jane Anders' novel without drawing comparisons with Ursula K. Le Guin's Dispossessed. There two planets in close proximity exemplified capitalist and anarchist societies, the latter suffering from shortages that made any genuine freedom near impossible. But Anders takes this trope and develops it much further. Sophie and Bianca are young, idealistic, student rebels - Sophie from a working class background and Bianca, with whom she is besotted politically and personally is an upper-class success story, destined for greatness. Except, Bianca is plotting the overthrow of Xiosphant's society - her student rebel group wants to shatter the rigid structures and reopen historic links with Argelo. The rebellion is doomed, and the two rebels flee to Argelo.

If that were all, it would be a mildly interesting story. But several other factors turn this into a classic. The first are the natives. The Gelet are a hidden telepathic communal society who welcome Sophie into their group. Everyone else dismisses the Gelet as dangerous animals and their meat is hunted to supplement limited resources. Its easy to see parallels with how European colonists viewed the indigenous peoples in our own history. Sophie alone understands that the Gelet are part of the solution to the problems caused by January's erratic biosphere. But in the struggle between Xiosphant and Argelo such seemingly abstract issues matter little.

The second factor that is worth noting is the way the novel treats interpersonal relations. Sophie and Bianca's friendship, which initially seemed to about to tip into romance, is deftly handled. Their estrangement and eventual opposition develops through the book. Bianca's horror at her realisation that her former friend has feelings is painful from the reader's (Sophie's) perspective. Around the disaster that is Sophie-Bianca are a number of other wonderfully drawn characters, adventurers, mercenaries, and alien(s) who interact and shape, support the main characters. The wide cast of characters is important to the book, but also contributes to its general atmosphere in more subtle ways. I was quite a way through before I worked out that one of the most things that made this such a refreshing read was that the main characters were all female.

I said at the start that this is a radical work. Its also fair to say that its politically nuanced. The environmental forces that threaten Xiosphant and Argelo are easy metaphors for our own environmental crisis. The ruling classes of the cities look to technological solutions (as well as military ones) that mirror our own society's hope that green-tech will provide the answers. On January just as one Earth, these tend to make things worse. The real parallels is much less obvious and its lies in the way that the answers to the crises (social and environmental) are already there. On January it is the Gelet who have a vision of a new world, but it is hidden because the majority of humans cannot see past their prejudiced understanding of January's ecology. Again there are many parallels for our own times.

As I write this review I learnt that The City in the Middle of the Night is on the list for 2020's Arthur C. Clarke award. It certainly is a strong contender that deserves a wide readership.
Posted by Resolute Reader at 7:54 pm