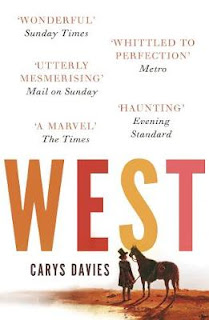 What happens when a passing fancy becomes an obsession? It's something that many novels have dealt with but few perhaps do it with such style as Carys Davies' West. Rightly it has won multiple awards and much praise, and its taken an age old subject and cast it anew.

Cy Bellman is a mule breeder some where in the American east. He has a few dreams, mostly about breeding more mules and moving west to find somewhere to do that better. But one day he reads a report of enormous ancient bones found in a swamp, and comes to believe that giant animals are still living in the unexplored far west of America. Unable to stop thinking about them, he abandons everything, including his beloved daughter Bess whom he leaves with his straitlaced God fearing sister, and buying a new hat, heads west.

If the book simply followed Cy's travels it would be a classic. Davies' prose is brief but descriptive - she evokes the lands brilliantly as weeks become months and years on Cy's fruitless search. The country he travels through are wilderness to him, but are of course inhabited by Native Americans from whom Cy buys supplies and assistance from with shiny trinkets.

In Cy's absence, Bess becomes a young woman, and she too is obsessed with her absent father. Long dismissed by the rest of their village as insane, Bess holds out hope that Cy will return - at the same time with dealing with all her own changes.

Of course, to us Cy's quest is insane. We know there are no dinosaurs or mammoths out there. But to his generation it wouldn't have been impossible and some well read people certainly thought it possible. But really Cy's quest isn't about the giant animals he draws in the dirt for Native Americans when he asks them if they've seen a mammoth. It's also a quest to understand (or even find) is dead wife. Bess comes to realise this and at the finale she is, rather suddenly confronted, by the metaphorical return of both her parents. The strange, and somewhat unpleasant, climax to the book required several re-readings. My initial dismay being replaced with satisfaction as I realised that Cy and his daughter had reached a redemption with themselves that no one else could really understand.

At slightly less than 150 pages the book packs a lot in and reminded me as a devoured it, that many authors today could learn a lot from the sparsity of words which paint a very detailed picture. Highly recommended.

Doctorow - The March
Vuillard - The Order of the Day
Harrison - All Among the Barley
Carr - A Month in the Country
McCarthy - Blood Meridian
Crace - Harvest
Posted by Resolute Reader at 10:53 pm