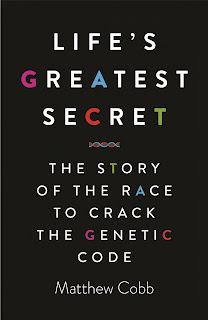 There are some iconic "races" in scientific history. US President Kennedy's 1962 challenge to put a "man" on the moon by the end of the decade is perhaps the most famous. More infamous is the US drive to get the atom bomb before the Germans and Russians. Others are less famous, and of these, the story of the rather more elongated race to "crack the genetic code" is probably the most important.

The same year that Kennedy made is speech, James Watson, Francis Crick and Maurice Wilkins won the noble prize for their work in understanding the shape of the DNA molecule. The event is well known, particularly in Britain where it's celebrated as a British success story. Ignored at the time, though increasingly better known today, was the work of Rosalind Franklin whose leg work laid the foundations for the discovery which was announced in April 1953.

But this was just one moment in a long, convoluted exploration of the biological structures and processes that allow leaving things to pass on information to their offspring. Matthew Cobb's book is a detailed and entertaining account of that story, which begins long before the discovery of DNA and has a cast of fascinating and sometimes eccentric scientists.

Cobb begins not with the practical science, but the theoretical studies by physicists and mathematicians who hoped to develop understanding of heredity science through understanding flows of information. Surprisingly then we're treated to such diverse, but important, subjects such as the development of automated anti-aircraft guns. Such early attempts to model behaviour formed the theoretical backdrop to latter attempts to understand biological information in genes.
But these approaches ultimately failed. Cobb explains:


None of the hypothetical codes dreamt up by the theoreticians were correct, because they made assumptions that were logical, rigorous and hopelessly wrong. The physicists' appetite for elegance and the biochemists' naive assumptions about natural selection led them to assume that the code had to be extremely economical, that it would look as though it had been designed along logical principles. But that is not how biology works. The genetic code is a product of biology and is messy, illogical and inelegant. It is highly redundant, but to bewilderingly varied degrees...Explaining this patter on the basis of chemical, physical or mathematical principles has so far proved difficult. Whatever logical there may have been has been overlain by billions of years of evolution and chance events. As Jacob put it in 1977, natural selection does not design, it tinkers with what is available.

Cobb points out though, that "at first glance the genetic code does indeed look like an artificial code", which lead many up the wrong path. In the 1950s many scientists tried and failed to crack the genetic code through theoretical approaches because they didn't (or couldn't) understand a key point:


Interpreting the genetic code in terms of precise analogies, strict definitions and exact parallels to artificial systems will almost certainly fail, because the genetic code, like every other aspect of biology, has bot been designed. It is part of life and has evolved. It can be properly understood only in its historical, biological context. That was the lesson of the doomed attempts to break the code in the 1950s and it should guide us today in trying to understand what is in our genes.

Watson and Crick's key moment is recounted quite early on in Life's Greatest Secret. Large chunks of the book are devoted to what happened afterwards as working out the shape of DNA was only one break-through. There are a succession of other noble prize winners in these pages, many of whom were doing science that I found quite difficult to follow. Indeed, one of the problems with this book is that despite Cobb's accessible writing style, if you lack knowledge of biology, much of the science is inaccessible. Personally I'd have found a extra chapter on the basics of genetics and cellular biology, invaluable but to be fair to author and publisher, I doubt that I was the target audience.

That said, this is still a book that contains a great deal of well presented, excellent information (as well as not a few entertaining anecdotes) and insightful comment. The final discussions on contemporary debates around genetics is also very useful. Readers with a better grasp of basic biology than me will find it very stimulating, but even those like me who took other GCSE and A-levels will enjoy the work.

Cobb - The Resistance: The French Fight Against the Nazis
Saini - Superior: The Return of Race Science
Reich - Who We Are and How We Got Here
Posted by Resolute Reader at 8:49 pm