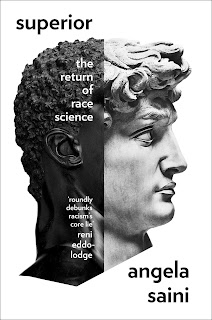 The election, and re-election, of right-wing governments around the world has encouraged the growth and confidence of racists and fascists. Racism is not a rational world-view, but racists, and those who want to encourage them often need to justify and explain their ideologies. Pseudo-scientific racist ideas have been around for some time - arising in particular out of attempts to justify the African slave trade. But, as Angela Saini's important new book explains, there has been a revitalisation of scientific racism and this is helping give confidence to right-wing ideologists today.

That these ideas should return is itself a shock. For most people the scientific justification of racism was closely linked to the Holocaust, and in the aftermath of the defeat of the Nazis, these ideas were banished. In fact, as Saini says, it seems impossible that rational minds could conceive of such ideas. Writing about the Max Planck institute, a prestigious scientific organisation in Germany which, in 2001, had to "accept responsibility for historic crimes committed by its scientists" under the Nazis:


The truth - that it is perfectly possible for prominent scientists to be racist, to murder, to abuse both people and knowledge - doesn't sit easily with the way we like to think about scientific research. We imagine that it's above politics, that it's a noble, rational and objective endeavour, untainted by feelings or prejudice.

She continues, "the answer is simple: science is always shaped by the time and the place in which it is carried out. It ultimately sits at the mercy of the personal political beliefs of those carrying it out." But there is a problem says Saini. The unique horrors of World War Two have made race science abhorrent. But, "were scientists in the rest of the world so blameless?" In fact, as my reference to the slave trade above indicates, "the well of scientific ideas from which Hitler and others... drew their plans for 'racial hygiene', leading ultimately to genocide, didn't originate in Germany alone. They had been steadily supplied for more than a century by race scientists from all over the world, supported by well-respected intellectuals, aristocrats, political leaders and women and men of wealth".

So the book is in two parts. The first deals with the history of race science. The second part looks at how those ideas are used today. But really there isn't a separation between these two halves. As one researcher from the 1970s who studied the far-right commented many years later, "I didn't really understand that there were these structures and networks and associations of people that were attempting to keep alive a body of ideas that I had associated with at the very least the pre-civil rights movement... going back to the eugenics movement... These ideas were still being developed and promulgated and promoted." Saini unpicks these networks, the shadowy sources of funds and the journals that allow those with similar beliefs to publish. Publication in particular gives a sheen of academic veneer to right-wing ideologists who want to push race science.

Today race science isn't solely pushed by those who want to see genocide. It can, as Saini points out, be used for all sorts of ideological arguments, for instance that equal opportunity programmes are "doomed to fail". In fact, one of the problems with contemporary race science, is that it often builds on the work of anti-racist scientists who thought their research (into eg genetics) was undermining the very basis for racism. Writing about the Human Genome Diversity Project, a 1990s programme that tried to understand human evolution and migration through genetics, Saini comments that the well intentioned scientists "failed to connect what they were doing with people's rel-life experience of race, with the history and politics of this deadly idea. They thought they were above it all, when in fact they were always central to it." Discussing one of the scientists who was central to the project, the esteemed scientist Luigi Luca Cavalli-Sforza who at the end of his long life maintained "there are simply no races in humankind", Saini points out that "it is also difficult to read his work and come away convinced that his generation of scientists had fully abandoned race science after the Second World War. Although they had ditched race in name, it wasn't clear that they had necessarily shed it in practice". So some scientists argue that there is so much variation in human genetics that the idea that there are only a few races is incorrect, instead there could be thousands of "social groups" having some biological uniqueness. But, as Saini says:


Canadian philosopher Lisa Gannett has similarly warned about the ethical limits of thinking about race in this new way. To some, it may not seem racist to think about average 'populations' rather than distinct 'types' of people. Certainly, early population geneticists such as Dobzhansky believed that racism was rooted in the assumption that within ethnic groups, people are all the same, whereas those like him believed that, within these groups, people are actually very different. But in the racist mind... it doesn't necessarily matter how differences are distributed, so long as they are there in some form or another. This conceptual loophole in population genetics - the fact that we're all different as individuals but that there is also some apparent order to his diversity - is what has since been seized upon by people with racist agendas. Gannett calls it 'statistical racism.

Modern science doesn't back up race science. But, as Saini points out, that doesn't matter, "racists will find validation wherever they can". The problem is exacerbated she argues, because we are increasingly locked into generalisations and categories that have little basis in reality.


We can't help it. We keep looking back to race because of its familiarity. For so long, it has been the backdrop to our lives, the running narrative. We automatically translate the information our eyes and ears receive into the language of race, forgetting where that language came from.

Even well meaning scientists fall into this trap, as do some anti-racists. In her chapter on "Black Pills" Saini shows how pharmaceutical companies are targeting "black" people for specific medical conditions, even though the causes of those diseases and illnesses are entirely social. Such an approach "lets society off the hook. It places the blame for inequality at the foot of biology. If poor health today is intrinsic to black bodies and nothing to do with racism, it's no one's fault."

In other words, it's not society at fault, for treating people differently, but genetics - and that cannot be helped. But as this book demonstrates, the truth is the opposite. Society both causes poverty and inequality, and the racism that is used to justify it. At best race science provides a cover for this, at worst it opens up the door to those who would like to encourage genocide.

Angela Saini's book is an urgent and important read for every anti-racist. But it should also be read by scientists, and not just those in biology departments. It makes it clear that tackling racism and bigotry needs more than just facts, but also requires an approach that understands the origins of these divisive ideas and can challenge them.

Perhaps we need a revival of left wing science - both in practice and organisation. There's a long tradition, particularly in the 1930s, of scientists collectively challenging dominant right-wing narratives. In an era when we see the revival of far-right politics and fascism and growing concern about climate change such networks of radical scientists could come together with anti-racist and environmental movements to push back the right-wing agenda. That would be a powerful weapon in fighting bigotry and the system that causes it. Angela Saini's book is crucial ammunition for that struggle

Richardson (ed) - Say It Loud! Marxism and the Fight Against Racism
Paxton - The Anatomy of Fascism
Hirsch - In the Shadow of Enoch Powell
Reich - Who We Are and How We Got HereSnowden, Jr - Before Color Prejudice
Posted by Resolute Reader at 9:09 pm