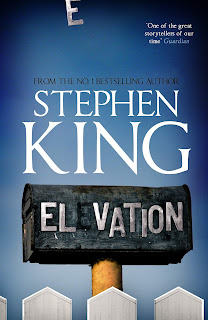 Having thoroughly enjoyed Stephen King's most recent full length novel The Institute I was excited to see this novella in the shops. As I noted in my review of The Institute, one of King's skills is the description of life in small-town America, full of memorable detail and dark foreboding. So the fact this short novel, set in the fictional Maine town of Castle Rock, is based around this concept made the book even more attractive.

Unfortunately King fails to pull it off this time. There are two aspects to the story, both centred on the likeable, if dull, Scott Carey. Scott finds himself experiencing two simultaneous problems. The first is that he is losing weight rapidly. But unlike people on a diet he is experiencing no simultaneous decrease in size. Moreover, things he touches also lose their weight. At the same time Scott's lesbian neighbours, Deirdre and Missy, are experiencing the dark side of small town America. Here, the conservative minded locals, are boycotting their restaurant and silently mocking their marriage.

Scott, uses his new found weightlessness to rather unconvincingly pull the town together around the gay couple and rejuvenate their lives and business. This happens when he helps Deirdre, a former Olympic athlete, win the annual Thanksgiving run. The picture of Deirdre, her wife Missy and Scott on the finishing line is enough to convince the conservative inhabitants that gay couples aren't a bad thing.

There's nothing particularly bad about the tale. But it just doesn't work. Prejudice doesn't just vanish like this based on a pleasant photo in the newspaper. The one occasion that Scott does challenge the homophobia he is unsuccessful and warned off. For the story to work it needed a more powerful challenge to the bigots. The disease itself might be intended as a comment on contemporary politics, but it is unbelievable - and given that King can make killer cars, haunted hotels and giant alien spiders living in the sewers believable that's strange.

The weight loss, and its inevitable outcome, might work as a convoluted metaphor for Scott dying of cancer, but as a plot device it is completely unbelievable as King fails to setup Castle Rock as the sort of place were this sort of thing takes place. Clearly this is all a metaphor by King for Trump's America. But if King thinks that it is going to be this easy to knock back the bigots that he'll have a surprise. It's only a short book (in fact I was very annoyed to find some 30 pages of the already slim volume devoted to an extract from The Institute) so King fans can read it quickly without feeling they're committing to a major tome. But I guarantee most will be disappointed.

King - The Institute
King - The Stand
King - Under the Dome
King - The Gunslinger
King - The Drawing of the Three
King - Wizard and Glass
King - The Wastelands
King - Wolves of the Calla
King - The Wind Through the Keyhole
King - The Dark Tower
Posted by Resolute Reader at 11:17 pm