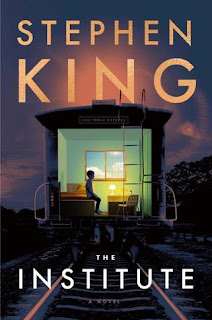 With The Institute Stephen King makes a big return to his classic form. The novel is a page-turner, building up from an unassuming start as disgraced policeman Tim Jamieson arrives in the small-town of Dupray, South Carolina. Here King excels at describing the lives of ordinary working class people as Tim gets to know the people and community.

Thousands of miles away, and seemingly unconnected, Luke Ellis's parents are killed by intruders and he is kidnapped. Luke is a child prodigy who also has some unusual powers - he can move small things just with the power of his mind. Luke wakes in The Institute, in a room that is almost a total facsimile of his home at his parents'. Here he discovers a brutal regime that tortures children to develop their special powers, and, when appropriate, passes them on to an even shadier section.

I was less gripped by the subplot that centres on the aims of The Institute than I was by the story of rebellion by Luke and his friends. Luke's escape and his eventual meeting with Tim is gripping, but the climatic resolution seemed a little contrived. I'm not sure that the authorities would be so quick to believe Luke's outlandish story - though I did like the idea that the Institutes' forces could be defeated by the townsfolk.

But what makes the book so compelling, and indeed characterises the best of King's work, are the small details that make the impossible so believable. In this case The Institute is deprived of funding, is run down and badly managed. Anyone who works in the public sector will recognise King's depiction of a failing bureaucracy that has grown stagnant.

But the real meat of the story is the rebellion of the children, born out of their mutual solidarity. In a world where the US government does put children in cages, the points that Stephen King is making are not exactly subtle but the fear of powerful quasi-government organisations is real. A real return to form, and existing fans of King will enjoy this tightly written novel.

King - The Stand
King - Under the Dome
King - The Gunslinger
King - The Drawing of the Three
King - Wizard and Glass
King - The Wastelands
King - Wolves of the Calla
King - The Wind Through the Keyhole
King - The Dark Tower
Posted by Resolute Reader at 9:21 pm

Thanks. I’ve been wondering about this one.