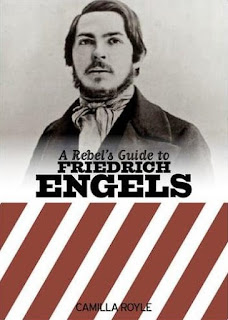 2020 is the bicentenary of the birth of the great revolutionary Friedrich Engels. The anniversary is likely to see numerous articles, pamphlets and books about Marx's friend and collaborator. But few of them will get across Engels' ideas and life as succinctly as Camilla Royle's latest contribution to the Rebel's Guide series.

Engels came from a wealthy bourgeois background. While the money he earned allowed him to lead the life of a relatively well off member of British society, it also enabled the Marx family to survive, Karl Marx to write and Engels' the space and time to develop his own work. As a result Royle points out that Engels was "a disappointment to his parents and a traitor to his class". It is a description Engels himself would have been proud of.

Royle's book begins with Engels' early years locating him in the milieu of those progressive German thinkers who were breaking with Hegelian philosophy as they attempted to understand the changing world around them. Engels himself fought on several barricades during various Continental revolutions and, like Marx, had to flee the authorities on several occasions. These movements shaped Engels profoundly, as did his experiences of the working classes. Royle writes:


Marx and Engels had more less independently reached the same conclusions about the importance of the working class; Engels by observing workers in England and Marx through his reporting of the revolts of the Silesian weavers, where thousands of workers took strike action and smashed machinery in protest at declining wages and living standards.

With their re-acquaintance in 1843 Marx and Engels embarked on a lifetime of collaboration. But Engels also produced some significant works independently. Most famously his The Condition of the Working Class in England. Royle also emphasises the importance of some of their joint works, showing how both thinkers contributed significantly to what would become known as Marxism. In her discussion of The German Ideology, a book which she explains Engels wrote most of the text for based on long detailed discussions with Marx. In the book the authors show how Marxism roots its understanding of human history in the relationship between humans and the natural world. It is a key point that shows how an ecological understanding of human society is central to Marxism, with important implications for Marxism as a tool to understand capitalism's environmental degradation.

I'm pleased that Royle devotes two chapters to two of Engels' lesser known works - Anti-Dühring and Dialectics of Nature. The first is a polemical critic of the near forgotten German Utopian socialist Eugen Dühring. Royle shows how Engels attacks Dühring's ideas explaining the centrality of dialectics to Marx and Engels' work. In her comments on Engels' Dialectics of Nature Royle shows that he was trying to apply these ideas to the natural world. Sadly, given the importance of "nature" to the current class struggle, Engels' book was left unfinished. Royle criticises the way that some of Engels' book has been interpreted, particularly the infamous question of the three laws of dialectics. She argues that these laws "can be useful in demonstrating the type of philosophy dialectics is. But if they are taken too literally, they can end in an attempt to look for rules in nature, which is more complex than trivial examples about boiling water". That said, she does celebrate parts of Dialectics especially the wonderful The Part Played by Labour in the Transition of Ape to Man. This is a section that stands the test of time and I'm glad Royle highlights its importance to a new generation of readers, given the parts of it where Engels writes on the human-nature relationship.

The final part of the book looks at Engels life in the aftermath of Marx's death. Engels helped make sure that Marx's unfinished work was published - a surprisingly difficult job; and he carried on the work that had been a near constant theme of his, and Marx's life, the building of socialist organisation. Here Royle defends Engels from crude attacks that argue he abandoned revolution at the end of his life, and show him remaining committed to the revolutionary workers movement till the end. Royle concludes by pointing out that the Marxism that both Engels and Marx developed was not an "unchanging dogma, but a method, a set of tools that we can use to help make sense of the world". Understanding the world helps us change it and Camilla Royle's book is an important contribution to making sure that 200 years after his birth the ideas and activity of Friedrich Engels helps our revolutionary struggle today.

Gonzalez - A Rebel's Guide to Marx

Engels - Socialism: Utopian and Scientific
Engels - The Origin of the Family, Private Property and the State
Engels - The Condition of the Working Class in England
Hunt - The Frock-coated Communist: The Revolutionary Life of Friedrich Engels
Posted by Resolute Reader at 7:27 pm