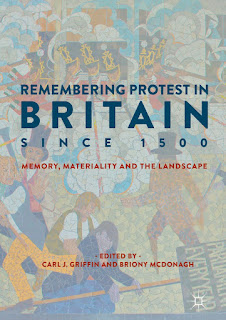 2019 was a very interesting year to be a socialist in Manchester. The bicentenary of the Peterloo Massacre in 1819 was marked by a plethora of events: a controversial new memorial was (finally) unveiled, walking tours, exhibitions, meetings and a major day of marches to a central rally all took place. I suspect that there were many more, smaller scale, events in schools, colleges and trade union meetings. At those events I attended I was struck by the contemporary parallels with Peterloo. Many speakers also noted this - not because they expected an imminent cavalry attack - but because there was a sense of deep discontent, poverty and inequality about Britain in 2019.

Manchester has, to a certain extent, always marked Peterloo. In a recent book Katrina Navickas has shown how the protest was a touchstone for numerous protest marches in the years and decades after 1819. Radicals and social movements sought legitimacy for their contemporary causes by associating themselves with Peterloo - by marching to St. Peters Fields or invoking the name of the massacre.

But as Remembering Protest in Britain since 1500 shows this is nothing new. Those of us who have been involved in radical and trade union politics for a while will know our movement is often more fond of celebrating past victories and defeats than it is of fighting to win new struggles. But this was very much true of the past. As Nicola Whyte says in the introduction to her chapter in the the book:


Memory has not atrophied, but rather the relationship between society and its past always takes on new forms, being wrought in the dialogical space between official and unofficial perspectives. Meanings do not merely shift with the passage of time, they are renewed through the evocation of various, multiple and unpredictable pasts.... people interpret and employ the past for diverse ends, both as a social resource and means to articulate their own life-histories.

Whyte explores these concepts by looking at Mousehold Heath, the site outside Norwich where in 1549 Robert Kett and thousands of rebels camped as part of what became known as the "Camping Time". While 1549 rebellion was part of a much larger period of rebellion Andy Wood has shown elsewhere how it was highlighted to posterity by the local establishment who wanted to use it's lessons to undermine potential future rebellions.

But Mousehold Heath was a site of protest going back to 1381 and for long after 1549. A 1589 map reproduced in the book is as much as record of past events as it is of contemporary locations and pathways. It is a "way of seeing" as Whyte explains, a "lord's view of the world...that chronicles past events and actions attaching them to physical places, and embedding a hierarchical understanding of social relations in the landscape". Even in the 21st century there were protest events on the Heath that had links back to the distant past. It is not enough to think about the impact of an event like 1549 through "oral tradition" or the records people have:


Memories do not simply reside in the mind to be evidenced in the speech patterns of local people; rather, memories are made through routine practices and experiences of being in and making landscapes. Memories of Mousehold Heath operated at the level of the everyday, remembering past generations and... the material work of day-to-day resistance. A landscape approach provides a useful methodological and conceptual framework for our understanding of the dynamic and contingent relationship between people and the material worlds in which they lived.

Such an approach is further developed in Briony McDonagh and Joshua Rodda's discussion on the Midlands Rising of 1607. This "all but forgotten" event saw a major, though relatively localised protest against enclosure in Northamptonshire. However 1607 was not an isolated event in the grander historical narrative. The authors put the rebellion in a "longer-term historical context and wider landscape setting". For them, the key question is the way that "national and local politics of land" shaped events prior to, during and after 1607. Primarily this relates to the way that the enclosure of previously open lands impacted upon those who lived and worked in the localities - thus 1607 was not a unique event, rather a peak of struggle. As the authors write:


We can read the Midlands Rising not simply as a response to an unprecedented upsurge in the scale and frequency of enclosure in the English Midlands in the decade prior to 1607, but rather the most striking movement in an ongoing surge of discontent with enclosure which had been building at least through much of the previous reign.

Marx and Engels wrote in the Communist Manifesto that class struggle "was [an] uninterrupted, now hidden, now open fight". History is full of peaks of rebellions and revolutions, but these are really the more visible parts of a continuum. McDonagh and Rodda bring this out extremely well as part of their discussion on 1607, an event that continued to inspire and worry both the authorities and the lower orders for years afterwards. The authors highlight several examples of those who raised the spectre of 1607 as part of their struggles (and legal cases) in the aftermath.

A similar continuum of protest is discussed in Simon Sandall's account of the protests in the Forest of Dean when protesters and rebels retained memories of previous social organisation (the Mine Law Court) to justify and bolster contemporary struggles against injustices caused by the development of capitalist relations in the region. This was more than simple tradition, but an active use of tradition as a weapon in their struggle - to inspire participants and give vindication to a cause.

Ruth Mather's chapter takes a different approach looking at the hitherto mostly ignored subject of the way that protest was remembered within the homes of working class people. Visitors to the Peoples' History Museum in Manchester and the Working Class Movement Library in Salford will know that the events like Peterloo were often commemorated by the issuing and sale of "memorabilia". But this was more than simply the purchase of pictures or plates that serve as a talking point, it was part of creating a radical tradition of memory and connection to the past.

This was not just about physical objects. Mather notes Peterloo was memorialised through "radical child-rearing". This included the naming of babies after radicals (136 children received the unfortunate first name 'Henry Hunt' after Peterloo), but also the production of materials to instruct children in the history of struggle. A map produced as a teaching aid, is Mather says, "physically materialising reminders of the events of the day" to "carry forward the aims of the radicals...to sustain the movement into the next generation."

Mather's chapter, draws on the memoir of Peterloo leader Samuel Bamford. She notes that the description of his home notes with pride the items that decorate a typical working class home. I raised a smile at this because in a recent visit to Rochdale museum's exhibition on Peterloo I noted that among the exhibits were Bamford reading glasses. The use of object to venerate, remember and memorialise history continues.
Space precludes a detailed discussion of all the chapters in this excellent book. They all, in different ways, contribute to a wider understanding of how radical movements create spaces for memorialising that draw on the past. Rose Wallis says in her discussion of the Captain Swing movement that "the memory of popular protest was... central in shaping both the resort to protest in the present and the responses of the authorities".

The past cannot be separated from the present. Historical struggles shape the terrain that contemporary women and men fight on, and within which they try to shape the future. Radicals planning incendiary attacks in 1830, riots in the Forest of Dean or organising marches to St Peters Fields in 1819 drew on their experiences, knowledge and understanding of what had gone before to try and be victorious. Similarly the forces of the establishment and authority learn their own lessons, for their own class. But what this book also shows, is that those memories are not simply remembered from generation to generation, but are often written into the very landscape that people act upon. As Carl Griffin comments,


we might usefully understand plebeian communities, individual bodies and the landscapes in which they lived as bearing the characteristics inherited of past tragedies, something akin to a cultural form of Lamarckism,... It is all there, but it is just that in the shift from the personal to the community narrative, the archive is used selectively, past events become written in the matter of place and in the body of the community...Through remembering to remember and remembering to forget, the past was constantly folded, remade, reanimated, becoming something always new.

Understanding how the past has been interpreted and memorialised thus helps us understand the actions and motivations of later generations. Learning from protest history is more than simply empowering our contemporary struggles - it helps explain the world we are in and the movements we have. Carl Griffin and Briony McDonagh's book is a wonderful insight into these processes. The individual chapters contribute to the central theme and are also very illuminating on their specific subjects. I highly recommend this collection to those interested in the history of protest and the writing of that protest.

Note: I do feel bound to comment on the disappointingly high price of Remembering Protest in Britain since 1500. Aimed at an academic audience it was only because the publisher had a massive online sale that reduced the price by about £60 that I was able to afford to get hold of it. Sadly this will price the book out of reach of the hands of almost any ordinary activists and readers who do not have access to an academic library. It is a real shame because its contents would appeal greatly to a current generation of radicals who might want to learn from the past.

Navickas - Protest & the Politics of Space & Place 1789-1848
Griffin - The Rural War
Wood - The 1549 Rebellions and the making of Early Modern England
Wood - Riot, Rebellion and Popular Politics in Early Modern England
Poole - Peterloo: The English Uprising
Riding - Peterloo: The Story of the Manchester Massacre
Posted by Resolute Reader at 9:23 pm