Rosamond Faith - The Moral Economy of the Countryside: Anglo-Saxon to Anglo-Norman England 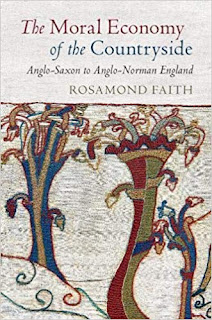 In this exciting new book Rosamond Faith sets out to answer an important, but often neglected question - why did peasants in the middle ages allow themselves to be exploited? If you pick up almost any book on the early feudal period you'll find whole sections that explain how the majority of the population was some form of peasant, and to a greater or lesser extent, they were obligated to give over a section of their produce to the lord, or labour on his lands for a set number of days a month. But, the oft ignored question, is why did they accept this as the status quo? As Faith points out "appropriation was not economically reciprocal: peasants do not need landowners in the same way that wage workers need employers".

In explaining this conundrum Faith utilises the concept of a "moral economy", a phrase most closely associated with the Marxist historian EP Thompson and developed by other thinkers like James C Scott, and she looks at the great transition that takes place in England after 1066 when a "new landowning elite, to whom these traditional constraints were unfamiliar, and who consciously set the relationship between lords and peasants on a new footing." The "traditional constraints" were the strict rules about when and were landlords could extract peasant labour for their own interests. Much of the book looks at what these rules were, and how they were transformed after 1066.

Faith puts an emphasis on feudalism having two aspects. One, which she links to the Marxist point of view, is one of economic structure. The other as a "set of legal concepts relating to holding land 'in fee' from a superior lord". While I don't think a Marxist framework precludes this second aspect, it is important (and it's worth highlighting) why Faith has such an emphasis. After the Conquest:


People came to write and think about these changes in terms of the formal relationships of the 'fee', of heritable land granted in return for service. Feudal tenure imposed the language of feodum, the 'fee' throughout rural society: even peasants had now to become accustomed to 'thinking feudally' and it took the efforts of skilled lawyer to devise ways in which peasant tenures could be differentiated from those of feudal tenures in general. Feudal language served lords well, of course, and much better than it served peasants, but it was not initially simply the language of oppression but a way of thinking about the entire social order.

This last point is crucial. What we see in the transition after 1066 is the construction of a new social order built on the smashing apart of the old order. But the new order had to reflect aspects of the old order for it to be legitimate in the eyes of those who were to be ruled. Before 1066 Faith argues that society in England was analogous the Scottish clan system which survived until much more recent times. This was a society where an "invisible network of obligations" existed.


These obligations "of the people of the scir to support its head, both materially with food and their armed support in war or out raiding, of the members of the warband to die defending their leader.... Lordship, then, was a very diverse form of authority exercised over land and people, and the area over which it was exercised was both an economic and a political entity.

But lordship wasn't a one way relationship. Faith calls it a "personal bond", and one where "the personal connection between two men, could be paired with the economic connection between landholder and tenant while stilling retaining its distinct identity: the earls granted leases to men who remained 'their men'....The link was a personal one - the willingness to fight could have had a good deal to do with this - and it was possible for a man to break this important bond by agreement".

Here is one of the key points. The link, relationship need not be permanent before 1066. It would be "broken by agreement". This "commendation" was the "antithesis of the "relationship intimately connected with landholding" that characterised the post-1066 period. Thus the willingness to partake in the relationship was because everyone involved felt they received something from the relation - including, as Faith emphasises, justice. The lord was responsible, not for providing courts or even rulings, but for ensuring that justice happened and those who did not have a lord had to find one or risk the whole system failing.

This is not to say that England, pre-conquest, was a society free of exploitation and oppression. But that there was, rather, a by-in to the system on behalf of the mass of the population that allowed the system to function. This should be emphasised because many peasant movements of the feudal era (and indeed later) used the idea of the "Norman Yoke" to symbolise the sense of a pre-existing society of universal freedom. While there is some truth, there is much more Utopianism about this vision of England before the Normans.

The Norman Conquest changed things forcefully, though it was presented "in terms of continuity". But we should not underestimate the transformation that took place. Before 1066 there was "no Old English law when it came to disciplining the peasantry", and the law of villeinage was introduced to correct this. But the key question was the introduction of the "concept of tenure" to England to bring the laws into alignment with Norman legal systems. This was "something new: legal rules to govern a lord's relations with people who owed him work". Post 1066 the relationship between individuals - between a free man and a lord, for instance, was superseded by the tenurial relationship between ruled and ruler, mediated through the land the latter owned.

What is so interesting about this book is the way it demonstrates that social relationships cannot be separated from wider political and economic relations, and that changing those relationships is not easy. It would be wrong to call the Norman Conquest a revolution - but it did revolutionise England's legal systems, and that in turn, transformed relations between people. These were most obviously those between individuals of different classes (and classes as a whole) but also, ultimately, between all individuals. Interestingly, just as other such changes latter in history required force to ensure they were adopted, the Normans had to use violence to weaken the old order and ensure they could introduce new laws. As the historian Marc Bloch wrote in his study of the transition:


No definite break with the past occurred, but the change of direction which, despite inevitable variations in time according to the countries or the phenomena considered, affected in turn all the graphs of social activity.

Faith argues that this had much further ramifications:


Ironically, it may have been only when the manor became fully effective as an economic unit with the resumption of demesne farming late in the 12th century that peasants would become capable of activating as a political community. In summoning their tenants from their own farms to work on their lord's land, landowners handed them a powerful and potentially subversive weapon... Collective action for a lord could evoke the possibility of collective action on their own behalf.

In struggling against their exploitation, the peasantry would have been inspired by a memory of things being different in the past. But they also used the situations created by the new system to their advantage when they could. Rosamond Faith's excellent book shows precisely how the arrival of the Norman's transformed England, and what that meant for ordinary people. It is a brilliant introduction to the period and one that I highly recommend as it puts the lives of ordinary people at the heart of history.

Bloch - Feudal Society: The Growth of Ties of Dependence
Thompson - Customs in Common
Hilton - Bondmen made Free
Cohn - In Pursuit of the Millennium
Harman - Marxism and History
Gorgut - Poor Man's Heaven: The Land of Cokaygne and other Utopian Visions
Posted by Resolute Reader at 3:01 pm