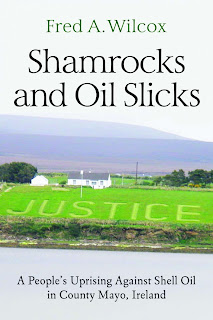 This charming account of a campaign of local people to stop Shell building a refinery and gas pipeline through the glorious coastal landscape of County Mayo in Ireland is both a rage of anger at a world were profit is put before people and planet; and a celebration of the ordinary people who stand up and protest against this.

In the early 2000s Shell decided to exploit the Corrib Gas Field. Suddenly, local people found workmen and surveyors on their land and in their communities. They made extravagant promises about how Shell's plans would create jobs and bring investment to local communities. They dismissed concerns about the safety of the extremely high pressure gas pipelines that would be laid metres from homes and communities.

Many people welcomed the opportunity to raise some cash. Those who weren't willing to give up their land, or stop fishing the waters that they'd worked for decades, soon found that a shady coalition of politicians, priests, company representatives and the state would organise against them. In some cases this meant even wilder promises. In other cases it meant intimidation, like the couple who found Shell had set up cameras and searchlights pointing at their family home, while men in masks watched through binoculars.

The local campaign grew though, as serious concerns were raised about proposals, and fuelled in part by the violent tactics of the Irish police. Famously five protesters, the Rossport Five, went to jail for 94 days in 2005 for their refusal to abide by a court injunction to stop them protesting. The jailing made the local campaign national news.

Fred A. Wilcox's book is a moving study of the campaign. An American who left the US in disgust following the Vietnam War, he is surprised to find that Ireland too had problems of democracy, accountability and the role of multinational corporations. When socialists discuss social movements we often point out the way that the struggle itself transforms people. When engaged in any campaign, strike, protest movement or struggle people change as they learn new things about the world, their friends and neighbours, the state and the government.

Wilcox's book demonstrates exactly how this happens. In particular many participants are shocked by the violence of the police, and the shady security forces that threaten the activists. One fisherman interviewed has his boat attacked by armed, masked men. Others are badly beaten. Many other activists, who had seen local policemen as friends and neighbours are shocked by the violence used against their peaceful protests. There are obvious similarities with even more brutal events in Nigeria when critics of Shell's pipelines, including Ken Saro-Wiwa, were killed in 1995.

Anyone who has been involved in any sort of campaign will recognise what takes place. I was, however, struck by more contemporary parallels - particularly with the movement against fracking where fossil fuel companies often make extravagant promises to local communities, which rarely materialise. The campaigns too are similar.

I don't quite agree with Wilcox's framework for explaining the behaviour of the police. He, rightly, points out that seemingly ordinary men can do awful things to their fellow human beings. But I don't think that the use of the infamous Stanford Prison Experiment or Stanley Milgram's electric shock experiments are particularly useful here. The Stanford Experiment has been heavily discredited, including in this excellent piece, and I don't think should form the basis of any left analysis of the role of the police (or other forces of the state). Instead it's better to understand the police as being far from ordinary. They can commit violence on behalf of the state precisely because they've been turned into a force for doing this. The vicious violence of the Nazi Holocaust and US soldier's in Vietnam (two other examples used by Wilcox) arises, not from ordinary people, but from people who have taught (through the dehumanising reality of radicalised war) to see others as sub-human.

This criticism aside, the experience of the campaigners who quickly learn how the capitalist system protects and supports the behaviour of the fossil fuel capitalism, is brilliantly told by Wilcox. Socialists also often point out that it is in the struggle that people learn that revolution is both possible and necessary - and its encouraging to see that some of the activists make that connection.

Sadly Shell wasn't stopped by these campaigners. But Shell didn't win either, selling the plant off a few years later. Ever wary about upsetting shareholders and concerned of their image, the local campaign in County Mayo made Shell's continued presence untenable. There's a lot to learn from these men and women, and thanks to Fred Wilcox for telling their story.
Posted by Resolute Reader at 10:40 pm

Email ThisBlogThis!Share to TwitterShare to FacebookShare to Pinterest
Labels: climate and environment, Ireland