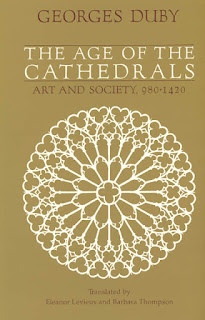 Georges Duby's The Age of the Cathedrals is a classic work that shows how the development of feudalism transformed the sacred art of the time, in particularly how it manifested through the art and architecture of cathedrals, but also monasteries, churches as well as the actuality of worship. Duby shows, in great detail, how social changes were reflected (and encouraged) by artistic changes. But he also roots his explanation in an understanding that society was one of class inequality and struggle. Thus, in a passage I first read when Nortre Dame Cathedral was destroyed by fire in 2019, we can see both Duby's beautiful prose and his clarity of understanding:


By definition, a cathedral was the bishop’s church, hence the city’s church; and what the art of cathedrals meant first of all, in Europe, was the rebirth of the cities… They were lodestones drawing wealth. After a long period of obscurity, they became the principal centres, north of the Alps, of the most advanced culture. But for the time being virtually all of their vitality still came from the surrounding fields…Thus, although cathedral art was urban art, it relied on the nearby countryside for the major factor in its growth, and it was the efforts of countless pioneers, clearers of land, planters of vinestocks, diggers of ditches, and builders of dikes, all flushed with the success of a flourishing agriculture, that brought cathedral art to its fulfilment. The tower of Laon rose against a backdrop of new harvest and young vineyards; the image of the oxen used in ploughing, carved in stone, crowned those towers… The facades of the cathedrals in Amiens and Paris showed the turning of the seasons by depicting different types of peasant labour. It was only right to honour them in this way, fort it was the work of the harvester sharpening his scythe, of the vine-grower pruning or layering his vines or spading about them, that had made the edifice rise little by little. The cathedral was the fruit of the system of manor lords – in other words, of the peasants’ labour.


Within the ruling class, a split widened between the warriors... and the churchmen, who took over all the charismatic missions that had belonged to royalty. This is what matters, particularly for anyone interested in the conditions with which social structures surround the birth of works of art. In the course of the eleventh century the local lords seized most of the royal prerogatives... They thus deprived the kings of the benefits hitherto conferred by the position of supremacy...in doing so they limited the extent to which the sovereigns could play a role in artistic creativity, fostered instead by the muted yet decisive emergence of the new class of lords.

Thus art would be representative of the interests and needs of these new classes. But religion couldn't lose one of its primary roles - to offer hope in the heartless world - and so "eleventh-century art helped to reveal God's face. It shed light. It claimed to offer man the sure means of coming back to life bathed in light". This came through architecturally as Cathedrals became massive spaces of light, instead of massive towers and heavy columns, big windows, open spaces and thin beams allowed light to fill the void.

A few hundred years of artistic evolution and social change later, things and developed further. Art was now more show, don't tell. It had become, in the view of artists and patrons, "a means of dispelling the mysteries of the world and revealing its inner order... Art... became an illustration, a narrative, a tale....intended to provide an immediately intelligible relation of a story... of God, but also of the knights of the Round Table, and the conquest of Jerusalem". Duby continues:


In the fourteenth century, creativity turned into the pursuit of fancy. As a result, its major objective was not to provide a space conducive to prayer and suitable for processions or psalmody as before, but one designed for display. Thus painting, the most appropriate medium for suggesting visions, raised itself at that very moment in Europe to the highest rank of the arts.

But if art reflected the system, it also was part of shaping it. Emphasising the interests of one or other class against the masses - shaping their ideas, helping to control and manipulate them. In the 13 the century when feudal society had reached "fulfilment" the "two dominating orders, churchmen and men of war, gathered around the king in whom priesthood and knighthood were joined" and so "royal liturgies accordingly installed that equestrian figure in the cathedral". Art in the places of religion now sent a message about who God's representatives were on Earth. Poignantly, Duby points out that "nothing is known of peasant death". The fears, hopes and dreams of the nobility were written large in their art and architecture. The peasantry had to look at these, and donate money for the privilege of pilgrimage. Cathedral art (and feudal art in general) was a message from one side to the other.

Duby's book is fascinating. But I found it a slog. The Age of the Cathedrals is one of those books that I read, but felt I was only scratching the surface of its insights. Lacking an in-depth knowledge of the history of the period, or the detail of the Bible I was only really able to accept what Duby was saying, not follow through his ideas. I suspect that other readers will get much more from what is a deeply sympathetic, materialist account of the linkage between art and society.

Lacey & Danziger - The Year 1000
Faith - The Moral Economy of the Countryside: Anglo-Saxon to Anglo-Norman England
Bloch - Feudal Society: The Growth of Ties of Dependence
Lindsay - The Normans and their World
Posted by Resolute Reader at 11:14 am