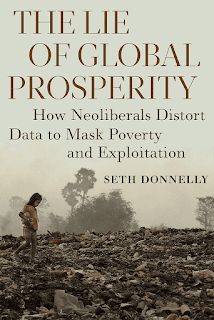 The end of 2019 has seen a growing "global revolt" in countries as varied as Hong Kong, Chile, Iraq, Ecuador, Catalonia and Lebanon. Driving those protests are a myriad of concerns, but one issue that dominates is the question of growing inequality, driven by neoliberal policies. Seth Donnelly's new book is not about these revolts, but is an explanation of the dynamics that have driven the impoverishment of the Global South and how the ruling class seeks to justify things.

The first part of the book looks at the "Lie of Global Prosperity". Donnelly begins with the United Nations Millennium Development Goals (MDGs) of 2000 - policies that set the ambition of drastically reducing inequality is spheres like hunger, poverty, education, child mortality and so on. The UN claims that this strategy has been universally successful, though as Donnelly points out:


It is ironic that the OECD member countries should take it upon themselves to design a campaign against global poverty, since it is their own neoliberal policies and financial asphyxiation of the Third World that has led to so much poverty, hunger and disease in the first place... most solutions proposed for meeting the MDGs are actually geared toward extending and maintaining the same unfair global order.

The reality is that the rich nations would have to pay a "small portion" of their wealth to eradicate inequality. Certainly the money spent by the United States on weapons alone would transform the lives of billions of people if used on health, education and sustainable agriculture. So claims to success in meeting the MDGs are, as Donnelly says, based "entirely on who is telling the story". Ideologically the United Nations are committed to free-market, neoliberal capitalism - and their argument for solving inequality rests very much on the idea that a "rising tide raises all boats". The problem for the capitalists is that this doesn't work, and so they've had to fiddle the figures. Donnelly explains:


The World Bank uses PPP [Purchasing Power Parity] to set the international poverty line... the original dollar-a-day line, set in 1995 using PPPs from 1985 was updated to $1.08 in 1993 with PPS from that year, and then was kicked up to $1.,25 with the publication of new PPPs in 2005. To date, the Bank;'s latest revision is $1.90 per day and is based on the 2011 PPP rates. Contrary to appearances, this new, nominally, larger figure does not mean that the Bank raised the poverty threshold; in fact, setting it at $1.90 per day actually lowered the threshold, conveniently erasing 100 million poor people overnight.

There is an accounting trick that means the World Bank and other institutions have effectively redefined poverty levels and a rate that reduces numbers of people classed as being in poverty. There are other tricks too that Donnelly details - essentially economists base their rates on commodity prices that may or may not be comparable between different countries in the Global South and the much richer North. Other mathematical tricks write out of history vast numbers of poor people. One example is from India. In 2007, the World Bank used a $1.25 PPP to place the "extreme poverty" rate at just above 30 percent. An Indian state run Commission calculated that 77 percent (836 miillion people) lived in poverty. Their level for the poverty line was 50 cents (20 rupees).

Of course, even this is a distortion because 20 rupees itself is relatively arbitrary. Is someone on 21 rupees actually much better off? Such sleight of hands mask the true horror of 21st century capitalism - that "71 percent of the world's population is in the low income category, with most living in severe poverty".

It's not just poverty of course. Donnelly shows how the UN's Food and Agricultural Organisation changed the definition of hunger to be based on "fewer calories" and "created an illusion of progress" while millions of hunger and undernourished people disappear from official graphs and powerpoints.

The second half of the book is Donnelly's examination of the nature of capitalism and imperialism. It's a good account of how neoliberal policies have deregulated and dismantled institutional protections that fed, clothed and housed millions of people. He shows how the rich countries (primarily the US) have used their economic and military power to make sure that the global capitalist system channels wealth in their direction, while outsourcing production to lower cost areas. Imperialism is often used as short-hand for military intervention by powerful economies against weaker ones, but it is, as Donnelly shows, much more complex - economic leverage helps shape the world as much as the US army, navy and airforce. Donnelly writes that:


In essence the old imperialist system - in which the core countries extracted raw materialism, minerals and primary commodities from the periphery and then manufactured them into final products within the core country itself - has given way to a new, more complex system.

I'm slightly sceptical that this is a completely new Imperialist system. I think the world economy has always been complex, and we must not forget that global Imperialism isn't simply about rich nations versus poorer ones - there is competition between, say, member states of the EU and the US over differing interests even while US interests shapes the wider picture. This means that changes (such as emerging economies, or revolts in the global south) can change the bigger picture. As Alex Callinicos has written:


The combined impact of continuing slow growth in the core of the system and of a shifting global distribution of economic power is likely to create significant centrifugal pressures on the major blocs of capital that, it should never be forgotten, are in competition with each other. Maintaining both the political cohesion of the advanced capitalist world and US hegemony over it is not an automatic effect of a self-equilibrating system It requires a continue creative political effort on the part of the US, and in particular the successful pursuit of divide and rule strategies at the western and eastern ends of the Eurasian landmass where the two zones of advanced capitalism outside North America are to be found.


Such pressures are clearly behind some of the current political ruptures between the US and its traditional allies.

This is an extremely important point and hopefully the growing global revolt with move beyond fighting aspects of capitalism into confronting the system as a whole. Capitalism in the 21st century doesn't simply mean poverty and hunger, but the threat of complete ecological breakdown. Seth Donnelly's important book helps explain why, as well as the lies the capitalists tell to pretend things are okay.