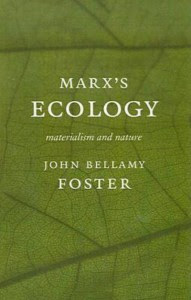 Published in 2000 John Bellamy Foster's Marx's Ecology was and is an extremely important work. It reasserted a crucial element of Karl Marx's thought for a new generation of activists and for more long standing revolutionary socialists. John Bellamy Foster argues that at the core of Marx's ideas is a nuanced and dialectical understanding of human ecology, rooted in his materialism. This rests in part in Marx's understanding and development of ancient philosophers, but is also a break with his contemporary thinkers which enabled him to develop a more radical and far reaching critique of capitalism, and vision of communism.

Foster begins this book by looking at the philosophy that underpins Marx's thought. In particular he engages with Marx's early work (including his PHd) which was based on the ideas of Epicurus. Foster shows how 19th century materialism developed and how Marx's own materialism developed from his critical engagement with other thinkers.

Foster quotes Bhaskar who writes that

For Marx, in contrast [to Hegel], 'neither thought nor language... form a realm of their own, they are only manifestations of actual life',,, so that 'consciousness can never be anything else than conscious existence.

Foster emphasises the importance of this approach, saying it rests "on a perpetual and close connection between natural science and social science, between a conception of the material / natural world and the world of society. For this reason, Marx continually defined his materialism as one that belonged to the 'process of natural history'."

There has been a tendency to see a break between the thought of the young Marx and the later writings of the old Marx. For some writers the young Marx was interested in the relationships between man and nature, as exemplified through Marx's writings on alienation. The older Marx by contrast, was more analytically, given to a scientific study of capitalism rather than the more general philosophical concepts. Foster argues that this is an artificial break, that Marx always began from a idea that "what individuals are depends on the material conditions of their production." Foster writes:

This is in contrast to other thinkers, like Feuerbach, who Marx and Engels argued, "posits 'Man' instead of 'real historical man" - abstracting humans from their social world.

But because humans are part of nature for Marx and because it is their ability to transform nature through their labour, the changing relationship to nature has an impact upon man (as well as nature). Thus Marx's theory of alienation developed in his 1844 manuscripts is far more than a study of the way that the worker is disenfranchised by wage labour. Alienation for Marx "estranges man from his own body, from nature as it exists outside him, from his spiritual essence, his human essence."

Foster points out that from 1844 onwards Marx always treated nature as an extension of the human body. This is crucial to understanding the way in which Marx's later analysis is less of a break with earlier writings and more of a continuation. For it is only by understanding the centrality of this human-nature relationship, this metabolism as Marx described it, that we can understand the impacts of the great transformation that capitalism has wrought upon the world.

Marx argues that the precondition for capitalism was the primitive accumulation of wealth, which takes place through the displacement of people from the soil, making possible the historical development of capital. This separation, manifested in the "antagonistic separation of town from country" is the root of much of the great environmental and ecological crises of the 19th century.

Foster goes into detail the way in which Marx and Engels engagement with contemporary scientific literature, as well as their economic studies enabled both of the revolutionaries to understand that capitalism not only destroyed workers lives through exploitation, but it also destroyed the natural world. Thus they argued for a world (free of alienation and exploitation) that could restore the "rift". As Engels writes:

Abolition of the antithesis between town and country is not merely possible. It has become a direct necessity of industrial production itself, just as it has become a necessity of agricultural production and, besides, of public health. The present poisoning of the air, water and land can be put an end to only by the fusion of town and country; and only such fusion will change the situation of the masses now languishing in the towns, and enable their excrement to be used for the production of plants instead of the production of disease.

Such an analysis betrays a far greater understand of the ecological relationship between humans and nature than is often attributed to Marx and Engels by more recent green thinkers. But, as Foster demonstrates throughout this book, it wasn't an aberration for them, rather an integral part of their thinking.

To back up this argument, Foster's book covers far greater ground than I can possibly do justice to in this review. He examines for instance the ideas of Thomas Malthus and the way in which both Marx and Engels engaged with debates around population. He also discusses the roots of Darwin's ideas and the parallels between the development of his materialism and Marx and Engels own ideas. In an important section he also explains what it was that Marx precisely meant in his infamous comment that Darwin's evolutionary ideas offered the "basis for our view" in nature.

This is an important and engaging work of Marxism. It deserves to be read and re-read by socialists who are trying to develop ideas around sustainability and the links between capitalist crisis and ecological destruction. I would also suggest it is a crucial book for those in the wider environmental / green movement.

In parts (particularly the early chapters) it is not an easy read, particularly for those of us without a background in the study of philosophy, but it is worth persevering and, reading some of John Bellamy Foster's other works (links to my reviews below) would certainly help in preparing the reader.