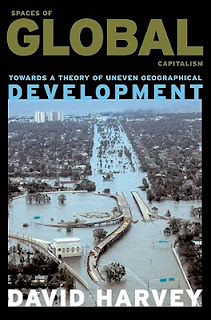 This collection of short essays by David Harvey begins with an essay on Neo-Liberalism and the Restoration of Class Power.  This a very clear argument about how the model of capitalism that arrived with Ronald Reagan and Margaret Thatcher allowed the ruling class to establish their control over the economy and their populations. Harvey explains that the

"neo-liberal state looks to further the cause of and to facilitate and stimulate ... all business interests, arguing that this will foster growth and innovation and this is the only way to eradicate poverty... The neo-liberal state is particularly assiduous in seeking the privatization of assets as a means to open up fresh fields for capital accumulation"

"The free mobility of capital between sectors and regions is regarded as crucial to reviving profit rates and all barriers to that free movement (such as planning controls) have to be removed except in those areas crucial to 'the national interest'."

From this Harvey argues we get the notion of flexibility. Workers, trades unions, public services must all be prepared to bend and change in the interests of the wider system, which is supposed to bring improvements to all. In reality of course this means that wages are cut and rights are removed, public services are dismantled in the interest of business profits which is supposed to be the same as the "national interest".

Neo-liberalism didn't get deployed everywhere but where it did there were "rapid increases in social inequality". However neo-liberalism did not solve underlying problems for capitalism, countries that had implemented neo-liberalism were still in economic difficulty even if they had dismantled or weakened many of the barriers to the capitalist class' drive to accumulate. Indeed Harvey points out that it was the centre-left, Clinton and Tony Blair who worked hardest not to blunt the worst aspects of the neo-liberal agenda, but to expand and consolidate it.

The defeat or weakening of traditional opponents of the capitalists through the use of neo-liberalism both ideologically and economically is the origin of Harvey's suggestion that neo-liberal policies have restored the capitalist class power.

The essay argues that there was an uneven implementation of neo-liberal policies geographically. This fits with the second A Theory of Uneven Geographical Development. Here Harvey looks at the various ways that different regions of the world have arrived at many different economic situations. He argues that "uneven geographical developments reflect the different ways in which different social groups have materially embedded their modes of sociality into the web of life, understood as an evolving social-ecological system."

This challenges those for instance who argue that Africa must always be poor or others like Jared Diamond who suggest that the key question is whether or not there are particular natural resources available in an area.

But this is not to ignore "nature". Harvey takes an extreme position (paralleled by William Cronon's analysis in his environmental history of Chicago), arguing that you cannot understand uneven geographical development without understanding how "the production of nature" has occurred through capitalist activities.

In a quote that will infuriate many if taken out of context he writes that "there is... nothing unnatural about New York City". What he means is that human activity and the economic systems that humans have created, has built and shaped New York. It is as much a product of nature as anything else. Harvey continues, by quoting Robert Park approvingly, that "in making the city man remade himself".

For Harvey the only solution to the problems that bedevil us today is not through single issue campaigns like environmentalism, or feminism, though those are important struggles that cannot be ignored. However they are at best "protective coverings" [Polanyi] even as they are "pitted against the dynamics of free-market commodification". Rather we need a movement that can "actually do something to check if not transform what a predatory capitalism is about."

The final essay in this book is a discussion of the notion of "space". Space for Harvey is more than a fixed geographical area, it is a dynamic changing region in time and location. It is something that is shaped by history, our actions, experiences and the economic system. To think about places or areas in isolation limits our ability to understand those spaces, or indeed change them. In a comment that echoes some of the ideas that dominated recent Occupy! movements, Harvey quotes Don Mitchell:

"In public space - on street corners or in parks, in the streets during riots and demonstrations - political organisations can represent themselves to a larger population and through this representation give their cries and demands some force. By claiming space in public, by creating public spaces, social groups themselves become public."

This is not of course the end of the struggle, but it does give a hint at how wider forces can see the role of "space" in political struggle, which can then lead to wider confrontations with the system. Ultimately the question becomes one of political power as movements come into conflict with the state. But if there is one weakness that this book shares with Harvey's more recent book Rebel Cities it is that it raises these further questions, but fails to answer them.