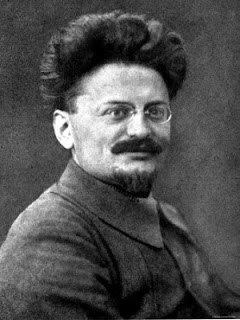 Of the four volumes of Tony Cliff's biography of Leon Trotsky, I suspect that this one was the hardest to write and it may well be the hardest to read. The first volume Towards October dealt with the early years of Trotsky's revolutionary life. His work in small political organisations, followed by the 1905 revolution which Trotsky helped to lead. It's a work that captures Trotsky's political brilliance and his organisational genius as he led the St. Petersburg Soviet through advances and retreats.


Volume two, Sword of the Revolution also deals with an inspiring period, that of the Russian Revolutions of 1917 as well as Trotsky's time in exile. Here again Cliff stresses the role of Trotsky in organising the insurrection, as well as his brilliance during the Civil War.

By contrast volume three deals with the defeat of Trotsky's ideas. This defeat cannot be separated by the isolation and defeat of the Russian Revolution itself and the triumph of an entirely different set of ideas - those of Stalin and the notion of Socialism in One Country.

Cliff discusses the various political forces ranged against Trotsky, those individuals around Stalin - particularly Kamenev and Zinoviev - and the growing strength of the bureaucracy. Cliff argues that Trotsky never abandoned a revolutionary outlook. Stalin on the other hand, retreated into the idea that socialism could survive alone in Russia in the midst of a capitalist sea. The struggle between these two viewpoints became the core debate in Russian politics, being reflected in, as well as shaping wider discussions on foreign policy, agrarian questions and the economy. As such much of this book is devoted to the factional struggles within the Communist Party.

Trotsky did badly in these battles. It clearly wasn't his natural territory, despite being politically and intellectually head and shoulders above his opponents, he wasn't able to break through. Towards the end of the book Cliff asks why this was, and can only conclude that it was the very isolation of the revolution and the retreat of the international working class movement that was hampering Trotsky. As Cliff writes;

"One should have a sense of proportion about the strengths and weaknesses of Trotsky's stand in the years 1923-27. While his strategic direction was correct, he made a number of serious tactical blunders and compromises. The point is not that had he been firmer he would have been able to beat Stalin, but that he would have laid firmer bases for the growth of the Opposition, not allowing the 1923 Opposition to wither on the vine, not disorienting his followers in the foreign Communist Parties."

But during a period of retreat, Trotsky's mistakes had far greater consequences than in a period when the working class was moving forward, "not a few mistakes were committed by the Bolshevik leaders during 1917 and the period of the civil war. But the sweep of the revolution repaired the errors. Now the march of reaction exacerbated the impact of every error committed by Trotsky."

The isolation of the revolution led to a number of serious problems for Trotsky. One of these was the lack of a cadre who understood what the party had been through and who Trotsky was. When Stalin and his cohorts argued that Trotsky had disagreed with Lenin and quoted him out of context, or pointed to his errors, many Communists were disorientated. But many of those who understood the past were gone. Support amongst Old Bolsheviks for Trotsky and the Opposition to Stalin was significant, yet in 1922 there were only 10,431 party members who had joined before February 1917. By 1927 the figure was less than half of this.

Some of the core chapters of this book also look at Trotsky's attempts to understand the failures of the wider struggles in the international working class. Cliff retells some stories familiar to readers of this blog, he looks at the defeat of the 1923 German Revolution, the British General Strike and the Chinese Revolution. Cliff argues that these were important, because in all cases, their victories could have helped end Russia's isolation. More importantly the incorrect analysis applied to the events by Russian revolutionaries, and Stalin in particular stemmed from the weakness of their own politics. Even today Trotsky's analyses from afar are often head and shoulders above anyone else.

The period of transition between the revolutionary era and the Stalin era was a slow drawn out process, but one that has concrete roots in economics and international politics. Cliff's analysis is beautifully clear and he is not afraid of criticising his subject. In fact I was quite surprised at how weak and compromising Trotsky was at times. In fact for a period of 18 months in the aftermath of the defeat of the 1923 Opposition, Cliff says that Trotsky effectively abstained from fighting inside the party leadership. He even remarks that Trotsky sat reading novels during Central Committee meetings.

Nonetheless, eventually Trotsky did come out fighting. He made a compromising alliance with Kamenev and Zionviev. When they proved inadequate in the face of Stalin's onslaught, Trotsky along with many of his supporters and other Oppositionists were drummed out of the Communist Party. Trotsky spent the rest of his life keeping the flame of international revolution alive in the face of Stalinist lies and slander. As Tony Cliff concludes:

"After 1927, when Trotsky grasped the enormity of Stalin's crimes, and called him the 'gravedigger of the revolution'. when the bloc with Zinoviev and Kamenev fell apart - from then onwards Trotsky became completely uncompromising."

The story of his final years of struggle is in volume four of Cliff's biography.