Leo Hollis - Cities are Good for You 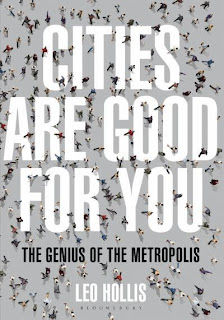 Marx and Engels argued that a prerequisite of capitalism was the displacement of people from rural areas into towns and cities. This separation between town and country was one of the defining points of capitalist society for them, creating as it did a metabolic rift between humans and the natural world.

In the two centuries of so since the birth of capitalism Marx and Engels' insights have been proved right time and again. Today, as a majority of the human population live in cities (3,303,992,253 in 2007 according to the UN) the problem of the "rift" is even more important given the threat of environmental crisis.

The solution however is not some return to a rural past. Leo Hollis' new book is a celebration of the city and its potential, as well as an exploration of the problems for citizens of urban areas. Hollis goes so far as to say that the city is the best chance we have for survival as a species.

Some cities, particularly in the developing world, are growing enormously. In the next five years Yamoussoukro in the Ivory Coast will expand by 43.8 percent, the Chinese city of Jinjiang by 25.9 percent, but London and Tokyo will only grow by 0.7 and 1 percent respectively.

Once in the city, people are shaped and dominated by it. Hollis tells us that "the city offers more chances of making connections than anywhere else.... it is these 'impersonal, superficial, transitory' relationships that make the city so unique and important." Hollis makes much of the energy given to a city by its people, and he celebrates the idea that cities can be designed to maximise that energy. "Can we design an urban space to encourage people to kiss?" he asks rhetorically, and indeed demonstrates that properly thought out spaces can make people linger and relax.

One of the strengths of this book is that it presents interesting aspects of urbanisation to the non-specialist. Hollis gives us studies that discuss how people flow through streets, or where they congregate to chatter on the pavement.

Over the decades various architects have sought to design the ideal city, a rational place to maximise comfort, health and pleasure. Ebeneezer Howard for instance, inspired by utopian novels of the 19th century, came up with a design for a future city in his Tomorrow: A Peaceful Path to Real Reform published in 1898. He argued that

"Human society and beauty of nature are meant to be enjoyed together... Town and country must be married, and out of this joyous union will spring a new hope, a new life, a new civilisation."

Howard's idealism here, echoes Marx and Engels in their hope that the rift between town and country would end in a socialist society, but it also reflected the belief that cities needed to be redone from scratch. Not surprising that Howard's ideas became influential for later town planners - the new Garden Cities of the early 20th century were built along similar lines to Howard's plans.

This quest for the better city is one that has always concerned urban planners. But it has also been a concern for those living in cities as they grow, develop and change. From the early days of skyscrapers when residents worried about being cast into shadow, to those who try to redesign streets in order to encourage walking. But Hollis is also rightly worried about the direction that cities are moving in today. He points out how our space is being restricted and taken from us, quoting the author Anna Minton:

"Who controls the roads and the streets is... enormously important to how cities function. Today there has been no public debate about the selling of streets at all. Instead, as ownership of British cities goes back to private landlords, the process of removing public rights of way is buried in the arcane language and technical detail of the most obscure parts of planning law... there is an adage in highway law which says 'once a highway, always a highway'... In many British towns and cities, this common-law right is being quietly eroded."

Hollis thus celebrates those movements that have sort to defend and challenge this attack on public space; the book is recent enough to note the Occupy movements, and discusses Lefebvre's Right to the City as a slogan and tactic. The Right to the City, Hollis argues following David Harvey, is more than being about ownership of space in a city, it is about access, democracy, control and involvement.  Taking the pressing issue of housing Hollis argues that instead of allowing homes to be foreclosed during the credit crunch, instead

"the city could buy the property from the banks at a good price, creating manageable housing cooperatives, guaranteeing that families can stay where they are and maintain their participation in the life of the city."

The problem is, of course, that capitalism doesn't work like that, and here, as with Hollis' other wonderful suggestions of how cities could be cleaner, safer and more involving for citizens, I fear that what is lacking is a strategy to challenge the forces that really shape cities. These are, of course, the forces of capital and the state's "armed bodies of men". This isn't to say Hollis is not aware of these problems, his understanding of the roots of the 2011 British riots in police racism demonstrates this. But Hollis' strategy to reach the better city seems to be based mostly on electing enlightened politicians who can bring about reform.

Of course, a good mayor can make enormous differences to a city, and Hollis has some great examples, particularly from South America. But he stops short of showing how the energy of the citizens themselves can really begin to alter power relations in society and rebuild their city. It would have been interesting to hear the author's thoughts on the way that great revolutionary movements of the past - the Paris Commune of 1871 or Red Petrograd in 1917 for instance - reshaped their urban environments.

Hollis claims that "most of us now live in suburbs where there are fewer people and sprawl allows us to live behind fences". This is a strange idea, given the descriptions he gives of the mass overcrowding in cities around the world, but perhaps reflects the audience his book is aimed at.

I did notice one significant error. Hollis claims that Friends of the Earth support plans for HS2 the High Speed Rail link being built in the UK as a way of reducing emissions. As far as I am aware, this is not true, as can be seen in FoE's response to the draft HS2 consultation here, where they say "current High Speed Rail plan will do little to cut carbon emissions".

These minor criticisms aside, this is an interesting and stimulating book for those thinking about alternatives to the unsustainable society that we currently live in.
Posted by Resolute Reader at 5:27 pm