E.E.Evans-Pritchard - Kinship and Marriage among the Nuer 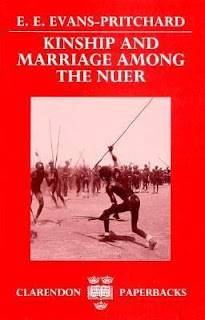 Before reading this review, I would encourage you to read my review of Evans-Pritchard's earlier book The Nuer: A Description of the Modes of Livelihood and Political Institutions of a Nilotic People.

Evans-Pritchard's works on the Nuer people are classics of anthropology and even though they were written over 70 years ago, they are still of fundamental importance in understanding human relations in pre and early class societies. He described communities where private property played a fundamentally different role in human society, where collective organisation dominated in a way that seems completely alien to us today and where political organisation was not about the concentration of wealth and power in the hands of a small minority but rather about the common interests of wider society.

In this second volume Evans-Pritchard develops some of these themes and looks at further aspects of Nuer society. In particular he examines the complex social organisation around marriage and kinship, relationships between human beings, that have very important ramifications for wider Nuer society.

For the Nuer relationships between family groups are the most fundamental aspects of society. These family groups however are very different from the family that we know from modern capitalism. Far from a couple having a number of children, there is a wider grouping of individuals who are seen as being the family. In her extremely useful introduction, the anthropologist Wendy James comments that there is:

Lineage in Nuer society is not through Patriarchal lines; as Wendy James comments:

"Lineage continuity thus depends not on the male fertility of a given community but on its economic and political ability to transfer bridewealth and marry wives to the names of its members (including some women and some deceased men) and to recruit new persons through adoption and other means."

This means that it can be difficult to comprehend family relationships amongst the Nuer for those of us used to our version of the family. Children for instance have different names depending on whether they are living with their father or mother.

Sex features widely in this book. To understand the Nuer is to understand how they reproduce the next generation of their community. This involves complex exchanges of wealth (cattle) and even more complex and ever changing social relationships, that I will come onto.

But the Nuer also have very interesting attitudes to sex. Before discussing Nuer marriage, Pritchard looks in detail at the concept of "incest" amongst the Nuer. Incest here is more of a cultural taboo on sexual and marital relationships between certain people.

It is more important to the Nuer because it spreads "marriages of members of any local group and [creates] innumerable links through women between persons in many different communities." Notably, incest taboos do not necessary preclude sex but are barriers to marriage.

If this challenges the notion that this might be related to any future offspring, the reader should note that to the Nuer a marriage isn't considered complete until the first child is born.

Relationships amongst the Nuer are further complicated, because when a woman marries a man, she is also considered to have married that man's brothers. Thus, "when a man dies... there is no question of the widow being remarried to one of his brothers, for the brothers already count as her husbands. The dead man's lineage have a right to inherit his wife because she is their wife, the wife of their cattle."

Readers must be careful not to interpret statements like this as meaning that the Nuer saw women as property to be exchanged who have no freedom. From a sexual point of view women in Nuer society seemed to have had a great deal of freedom. Pritchard points out that by the time a girl is 15 or 16 she has at least one lover and probably one each in the neighbouring villages. He goes on to say that "I doubt whether any girl in Nuerland goes to her husband a virgin". When it comes to marriage, proposals will be sometimes initiated by the young woman, and no reputation in Nuer society is more shameful than that of a wife beater.

And sex is not the taboo that we might think it is - "adultery in their eyes is an illegal but not an immoral act." Pritchard comments that he was struck by the frequency of adultery and the infrequency of quarrels "or even talk about it."

Women in Nuer society sometimes seem to have little choice, but the reality different:

"So long as a girl is married to a man with cattle she has fairly free choice of a mate. Much depends on whether the girl's family approve of the man's family. In theory, the parents choose their daughter's husband and only formally ask her consent, which she should give in duty to her parents, for marriage is not her business but the business of her menfolk. In fact, it is very difficult for parents to force their daughter to marry a man she dislikes, and strong-minded girls stand up against family pressure on this issue."

But Pritchard puts economics at the core of his explanation of Nuer society. This is the exchange of cattle that is central to the marriage process. This has extremely strict rules and both sets of parents will spend long periods in negotiations. "The usual payment [of cattle] is from 20 to 30... the bridewealth cannot fall to less than 16 beasts. On the other hand, it cannot rise to more than the bridegroom and his people possess or are prepared to give."

Note that this is very different from a dowry. This is wealth given to a family to compensate for the loss of a daughter. This exchange is a fundamental part of Nuer society, as Pritchard explains:

"Nuer can be very generous in this matter and if a son-in-law is respectful and industrious they will not break the union because he takes along time to pay the final cows, for marriage is not simply handing over a girl in exchange for cattle but is the creation of a series of new social relationships which, once formed, are not easily or lightly severed, especially when the union is completed by the birth of a child."

While the marriage rules and conventions seem complex, the Nuer are relatively relaxed in other aspects of family life. Pritchard explains that:

"Nuer do not attach great importance to physiological paternity. Men prefer to beget their own sons, but it is not ignominious to nurture children begotten by others. Nuer pay little regard to the manner of begetting so long as the legal fatherhood of the child is well established."

Nor do the Nuer necessarily worry too much about the sex of individuals in a marriage. Pritchard says that it is possible for a Nuer marriage to take place between two women. One of whom takes on the social position of the husband. Such marriages "are by no means uncommon... and they must be regarded as a form of simple legal marriage for the woman-husband marries her wife in exactly the same was as a man marries a woman. When the marriage rites have been completed the husband gets a male kinsman or friend or neighbour... to beget children by her wife. When the daughters of the marriage are married he will receive for each a 'cow of the begetting'."

For the Nuer there is a clear sexual division of labour. But the woman plays a key part in production. It is her work, milking the cattle and as dairymaid and cook that is crucial to the family. The man is considered "helpless" without a wife and thus marriage is the only way a man can have a home of his own. This means that Nuer women have a central and important role in the political and economic life of the community.

Labour for the Nuer is a very different thing to the work we see under capitalism. No one in a Nuer village would starve unless everyone was starving, children are nursed and looked after by the extended group, not simply their mothers and while the family produces much of what it needs, collective work is common. Activities such as hunting are communal, as are things like garden clearance. In these tasks "hospitality is provided for friends and kin, who accept the invitation to take part in the work because they are friends and kin. The owner of the homestead does not supervise the work and each does as much or as little as he chooses."

These social, cultural and economic differences point to a fundamentally different dynamic between people than the atomised, hierarchical, sexist society that characterises capitalism. Life for the Nuer was not however a Utopia. There was violence, jealously, conflict, as well as hunger and disease. However the different approach to life, arising as it does from a different mode of production, means that people solved those problems differently. Given the enormous material advances that modern capitalism has given us, we should know from studies of people like the Nuer that the barriers to us living in fundamentally different ways in the future are not down to human nature, but are social.