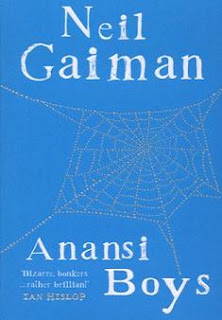 Having now read three of Neil Gaiman's excellent fantasy novels, I think I've discovered a pattern. It basically  goes like this. Lead character of novel finds himself experiencing fairly inexplicable events. Turns out, reality is actually not as lead charactr thought. Magic, Gods or something else as unbelievable also share our world. Gradually said character accepts this new reality and even begins to be able to take part in it. Eventually world is saved by this character discovering hidden talents, God like powers or magic.

So it was with American Gods and Neverwhere. So it is also with Anansi Boys a novel that shares some of the world view of American Gods and at least one character. Anansi Boys though, is a much shorter, tighter and more straightforward novel than the other two. At the beginning of this story the God Anansi dies. Anansi was a trickster, enjoying jokes and tricks, poetry, singing and the finer things in life - wine, women and song. Charlie Nancy doesn't. The only things Charlie wants are a quiet life far away from his father. When his father dies, Charlie discovers a previously unknown brother, Spider, who seems to have inherited the worst aspects of their dad and proceeds to destroy Charlies life. Sleeping with his fiance, getting Charlie arrested for white-collar crime and the like.

The story, follows a traditional pattern. Charlie realises that his brother seems to have unusual powers and his attempts to have Spider banished, by making a pact with another God, only unleashes further problems. Making pacts with the Gods tend to have double sided consequences.

All in all, its a fun read. Existing Neil Gaiman fans will enjoy it, and the sub-plot, which is a neat little whodunit that ties all the strands of the magical world plot together with the bemused non-magical world orbiting Spider and Charlie, is quite fun in and of itself. The characters are pleasantly flawed. No goody two shoes here. Read it if you enjoyed American Gods, but do read that first.