Adrian Bell - Men and the Fields 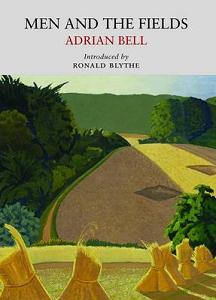 There is always a danger when reading books about the rural past, of falling into the trap that there was a wonderful utopian life that has been forgotten, destroyed or superceded. Adrian Bell's book avoids this trap precisely because it is a celebration of what he saw and loved, rather than an attempt to pretend the world  was something it was not.

Bell was himself a farmer, though he was an accomplished writer. He loved nature, people and the landscape. Men and the Fields is his celebration of those things in various rural parts of lowland Britain, particularly Suffolk and the south coast. Bell's gift is a brilliantly economic style that sums up his surroundings without feeling like the reader is having descriptions piled onto descriptions. Here he ruminates on the view from a train station, but equally important is the station master:

"Out of the cottage came a countryman dressed in gold lace: he was the station master. He gave me my ticket and recommended the view from the end of the platform. I said I had seen in beautifully from the river. He insisted it was better from the platform: you could see all along the valley both ways. So I went and sat at the end of the platform. There were two sets of arches: the railway and the road, bridging each other and the depth at different levels. It was like a dim picture of ancient viaducts I remembered sitting opposite once in a farmhouse dining room. I would have thought I had made it up from that picture in a dream. But somehow that railway ticket was never collected. I have it still."

For Bell, the countryside cannot be seperated from the people who live and work there. His descriptions of fields rarely ignore labourers. His love of birds and plants frequently are linked to locals who tell stories of them. Here's a delightful description of a farming couple:

"A woman comes round into the wind; a big woman dressed in sacks and gum boots. The sacking bulks her out and the boots make her legs look like a horses. She comes out into the gale and hardly pauses in the force of it but pushes on through giddy straws across the stackyard... Then she stands full blast and shouts orders to a man in the field - she looks stronger than the wind." 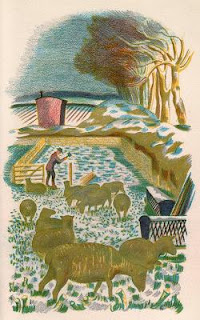 The rigid class differences of the agricultural world lie, barely concelled below the surface of Bell's accounts. The deep respect from labourers for their masters, is often combined with a cynical attitude to those betters who think they know it all. There's a telling tale from a labourer who recounts the different attitudes of farmers towards their workers. The one who offers a cold glass of beer on the doorstep on a winters day, the other who stands him by the fire with a warming whiskey.

Bell was writing about the 1930s. British farming was coming out of an enormous depression caused by withdrawels of wartime subsidies. It was about to be transformed again, the Second World War led to an enormous expansion of farming and the massive motorisation of the industry. As he writes, rural Britain is on the cusp of change. Bell notes the changes to the roads, the impact of the motor car on flocks of sheep, but he doesn't reject these, he sees them as part of an evolving, changing countryside. The beautiful language combined with the wonderful colour paintings that accompany the book, by the artist John Nash combine to make this a lovely read and a lovely piece of art in itself.

Age of Uncertainty has more of John Nash's paintings from Men and the Fields here.

Posted by Resolute Reader at 10:41 am

Interesting, I'd never heard of Bell, but (according to wikipedia) he's connected through Edmund Blunden to some of the post-WWI literary figures I was studying. In the intelligentsia there was a significant interest in land use, human impact on the natural world, and the effects of these on society in the 20s and 30s, ranging from the Sunlight League, to the Garden City movement, to the Simple Lifers and Naturists. A bit less naive than the William Morris-style imagined idyllic past, but still not a practical response to modernity, by and large.

Sounds as if Bell was more level-headed than these, possibly because he actually worked the land rather than speculating in the absence of fact.

I'd come acrosss Bell's books, but I had no idea that he was the father of Martin.

Thanks for posting the link - your review has whetted my appetite. I like the fact that Bell could be so passionate about the landscape, but eschew any sentimentality about it.