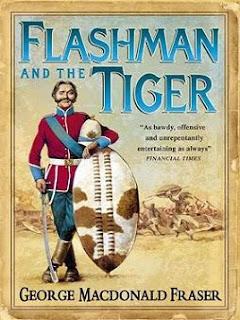 I suspect, that had the blogosphere existed with George MacDonald Fraser's penultimate Flashman novel appeared, it would have erupted into loud moans. For decades Flashman's fans had been waiting for the novel that explained his adventures in the American Civil War. Instead Fraser produced a novelette and two short stories. I suspect that there is an element of vanity publishing here. Fraser was a successful novelist who had enough time and space (and presumably cash) to write about exactly what he wanted, and shucks to what the fans demanded.

Of course, there is much here to satisfy the Flashman fan. In my opinion, these stories round out the character of Flashman, particularly because they show how, in his later years, he was much more of the jovial old grandfather type. Keen to enjoy his well earned rest and not too prepared to show of his laurels.

The longest part of this book is the novelette The Road to Charing Cross a classic story of diplomatic underhandedness and attempted murder. It has some similarities to one of the earliest novels, Royal Flash and shares some characters with that novel. It has a couple of delightful twists too, and Flashman is left a little high and dry. Interestingly, it clearly was intended to serve as a bridge to one of the other eagerly awaited Flashman tales - the story of his involvement in the Zulu wars. Several references elsewhere have indicated that Flashman was at Rorkes drift, and while details are scarce, the final story here begins in that chaotic battle. It finishes with one of Flashman's few examples of bravery - albeit fuelled by a decent whiskey. A few literary stabs at another Victorian novelist finish things off nicely.

Finally, the middle story The Subtleties of Baccarat is by far the best. Dealing less with adventure and war, and more a drawing room scandal, the tale centres on the Royal Baccarat Scandal. This was a minor piece of ruling class snobbery, which had the characters involved been less interested in their personal images and the delight of scandal and expressed more of a collective attitude to solving problems, would have had a better outcome for all concerned.

Fraser puts his own spin on the story, but he illustrates brilliantly the life of the ruling classes in late Victorian times. Their scandals, gossip, adultery and lack of individual solidarity. The future Edward VII was dragged in front of the courts as a witness and the whole lot were made to look foolish in front of the mass of the population. The scandal was on a par with anything the Daily Mail might put on its front page today and no doubt helped to undermine respect for the ruling class at the time. Fraser illuminates history neatly with this story in a way that he would have done for the US Civil War had he lived long enough. Flashman fans should not dismiss these well written and fascinating episodes in the life of our favourite rake.
Posted by Resolute Reader at 10:22 am

The end of Flashman and the Tiger includes (I believe) the only encounter Flashman ever had with a character known to be fictional. It was a bit of a shock, as I had grown subconsciously to regard the Flashman Papers as genuine, even knowing consciously that they weren't. It's as though Fraser was allowing himself for one fleeting moment to admit that the stories were fiction.

Interesting point Joel. The only other fictional characters (i.e. by authors other than Fraser) Flashman meets that I know of are of course,

I really did not like this one - it just seemed bizarre and atonal, not really a Flashman book at all. The first story was decent, the second a waste of time, the third baffling. Is Flashman's getting mixed up with a Sherlock Holmes villain more interesting than the Zulu Wars? It's just Fraser having a lark, and after awhile I found it tedious.

I did read an interview awhile back where Fraser claimed he found the Civil War a boring topic to research and write about. This probably explains why he never got around to a book on the topic.

Also, according to Amazon someone's just published a book called "Flashman and the War Between the States." My hopes aren't high, unless Zombie GM Fraser published it under a pseudonym.

I did read an interview awhile back where Fraser claimed he found the Civil War a boring topic to research and write about. This probably explains why he never got around to a book on the topic.


He put in a lot of effort to write about the slave trade and American slavery, John Brown's raid and the Old West . . . but he found the U.S. Civil War a bore? Sounds like Fraser was shoveling a lot of shit, because he felt he wasn't up to writing a novel about Flashy's experiences during that particular war. Then again, this would explained his vague portrayal of life on a Mississippi plantation.