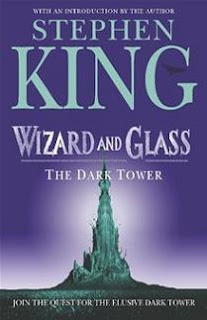 When I started reading Stephen King's Dark Tower novels, I made a vow to only purchase them when I found them in second hand shops. Seems that number two was hard to find, but three, four and the rest seem readily available. Hence the gaps between reviews of this series will shorten.

So what of the fourth book in the series? I worried at the start that this was some sort of attempt to recreate an epic on the scale of the The Lord of the Rings. Stephen King points out in his new introduction that the Dark Tower series is very different to Tolkien's work and longer. By volume four, King is getting into his stride. The characters are now well rounded and familiar. If there are few answers to the large questions about the nature of the quest, that's because the joy is in the journey itself. However in Wizard and Glass, a whopper of an 850 page novel, most of the space is given the Roland's backstory.

Roland, the last gunslinger, originates in a world that was once a version of ours, technologically rich and oil dependent. It began to come apart at the seams and turned into a odd mix of the feudal and wild west. Surprisingly, this isn't too difficult to believe. The story is really a coming of age tale, and King shows his abilities as a storyteller by avoiding too much in the way of happy endings, giving the reader plenty of action (there is a brilliantly written piece of gunfighting) and creating some truly scary bad guys and gals.

I've said on a number of occasions that I think that Stephen King is vastly under-rated as a novelist. He might be damned as a shlock-horror writter by the critics, but I do urge you, dear reader, to take up his books. His approach - weaving a number of themes and tales together works brilliantly, and if some aspects of the tale seem tacked on at the end, that's likely because their being stored up for later use. One complaint might be the brief reapperance of the Tick Tock man. That could have played out longer and better.

If you're new to the Dark Tower series, don't begin here. If you've read the others, than I can only imagine you're waiting to find this second.

King - The Gunslinger
King - The Drawing of the Three
King - The Waste Lands
Posted by Resolute Reader at 4:31 pm