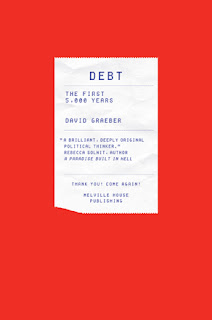 David Graeber has produced an important and stimulating book. It is a radical book that clearly has its roots in the anti-capitalist movements that the author has been part of. But it is more than simply a book that is designed to challenge capitalism. Graeber is attempt to argue that the conventional way of looking at the world is wrong, and that the way we have lived our lives in the past has been very different to how we do today.

Debt, Graeber argues, means a very specific thing to us today. It is an obligation that we accept we have to someone else, be that someone a bank or a loan shark. The obligation we feel is the sense that the debt (usually money, though not always) must always be paid back. Graeber contrasts this, with how obligations have been viewed in the past. For most of human history we have organised our lives through hunting and gathering of foods. In these societies, the obligations we had were never the result of someone making a loan with their own material interests. There were no hunter-gatherer loan sharks. Graeber illustrates this well with an example from a well documents group of hunter-gatherers, the Innuit.

One person who lived with and studied the Innuit described returning empty handed from a hunt. Fearing hunger, he found a successful hunter giving him several hundred pounds of meat. The man objected to his thanks.

"Up in our country we are human!" said the hunter. "And since we are human we help each other. We don't like to hear anybody say thanks for that. What I get today you may get tomorrow. Up here we say that by gifts one makes slaves and by whips one makes dogs."
Such attitudes do not simply come from shortages. Other anthropologists such as Eleanor Burke Leacock have documented how hunter-gatherer tribes share food out, even when there isn't enough for everyone. In other words, the obligations people feel are rooted in their collective life, not out of self-interest.

The way these attitudes change is a great theme of Graeber's book and would be difficult to cover here. He is at pains to argue that debt as a general notion has existed throughout history, though most of the time it has been more to do with human social relations than with material gains. These social debts might be the obligations you take on when marrying someone - the promise to feed and look after them. They might also be the money you give as a dowry - not a payment, but a donation towards the cost of living. Over time, Graeber argues and in many ways, such social obligations take root as material debts.

Graeber upsets a great many apple-carts. One of which is in his discussion of Adam Smith and the conventional economics that have flowed from his ideas. In trying to answer the question "what is money?", Smith and others always answer in similar ways. "Imagine a world without money. We'd have to survive with barter. I have a bag of nails, you have a loaf of bread. I must exchange bread for nails. This barter economy is cumbersome, so money develops". I paraphrase, but you get the idea.

Graeber argues that there is no evidence for "barter economies". Those who say for instance, that when the Roman Empire declined in an area, society "returned to a barter economy" are placing their vision of what they think happened over reality. The truth is that Roman money disappeared, but in its place remained alternative currencies, sometimes virtual ones. "Barter economies" says Graeber did not exist, exchange took place through elaborate systems of credit. With the development of urban economies rather than early agricultural ones, people might need bread, and only have nails, but the loaves would have a particular value assigned to them, as did nails. Graeber cites plenty of examples of societies which have distributed goods to people who need them, waiting for future payment when fishermen returned with their catch or the nails were manufactured.

So explains that after the Romans left, villages might no longer have Roman money. But they did have Roman prices. They might value a sheep as so many pieces of gold and bread as so many pieces of silver, and this allowed exchange to take place. Money wasn't real, debt existed by in a concrete sense of credit. Not an abstract one. Presumably the person who failed to come good on his or her debt was eventually refused assistance.

All this is very interesting, and it certainly seems plausible. The problem with the book for me was that I don't think that Graeber really gets a handle on what drives human economies. It isn't debt, nor is it finance. Production exists because people need to provide for their material needs and the way that production is organised determines all the other aspects of their society. The way that the forces of production in society develop, challenging and changing the relations in society ultimately helps bring about change. This is a very short explanation of historical materialism, but I think Graeber would have benefited from expressing his history in terms similar to this. Otherwise you are left feeling distinctly like human history being a series of events that are connected only through a gradual development of a money economy.

I also feel that Graeber misses out a class analysis. That's not to say he doesn't acknowledge the existence of classes. He is very clear that these do exist in society and critical of the attitudes of the rich towards the majority of society. But I don't think he explains what motivates people in different classes. Why do the rich behave like they do? Why are they so irrational in their behaviour?

Capitalism is a fundamentally different human society to earlier ones. Its economic dynamic is the need to accumulate wealth, for the sake of accumulation. This is not the same as earlier class societies. The lord of the manor did not go out and exploit the peasants for the sake of it. He did so until he had satisfied his needs. Capitalism exploits workers because it needs more wealth, to reinvest and restart the treadmill of production. This difference also shapes how we perceive ourselves and our relations to others. In this context debt between people takes on a different meaning under capitalism then it did in previous societies. We are atomised and individualised, set competing against each other.

That said, Graeber has some good insights into different eras of human history and it may well be my own personal predilections that lead me to think his chapters on hunter-gatherers are the most interesting. This is a book that will be debated and discussed at length and is worth study. While there are holes to pick and arguments to be had, the themes are generally of interest.

Readers wanting a more in depth critique of Graeber's book are directed towards this review here.
Posted by Resolute Reader at 11:02 pm