Peter Robb - A Death in Brazil 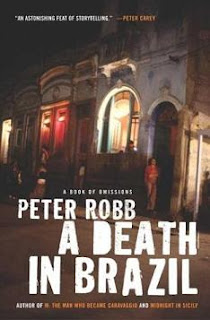 The opening chapter of Peter Robb's history, cum-travelogue about Brazil, begins with the attempted murder of the author. This is somewhat unusal for a book on history, though rather cleverly, despite starting with one of Brazil's perceived problems, the author actually manages to show us something rather different.

Nevertheless, violence is quite a big part of this book. That is because Brazil's history is fairly violent. Interspersed with his musings on Brazilian food, literature and bars, Robb takes us through the story of the slaves who cut the sugar cane and earned their masters fortunes. He talks about the decimation of the indigenious peoples, who were first assaulted by European disease, then sold into slavery and attacked when they escaped.

Some of this history is fairly unknown outside of Brazil. The story of Canudos is fascinating. This was a town, founded by a wandering, radical preacher who attracted thousands of people to him, not simply because of his sermons, but because the town was a beacon of openness and religious tolerance. The Brazilian military government saw it as a threat. Talking up the stories of lewd sexuality, and worrying about an alternative centre of power to their own capital, they sent four expeditions to destroy the town. There must have been something about living in Canudos that the people found better than the lives they could expect from the Brazilian landowners, because they fought back and defeated three military attacks. The fourth, used artillary and machine guns to massacre the inhabitants, men, women and children.

Robb's book is at its best when looking at more recent history. Though we might be accustomed to tales of violent attacks on street children or tourists in Rio, the real violence was the state sponsored war on the poor that dominated the 1980s and 1990s. Here, Robb draws out the complex chains of government and state corruption, the twisted networks of bribery that dominated government. The few individuals who grew fat stealing public money for themselves. While the majority of Brazilians coped with falling pay packets and enormous inflation.

Here Robb begins the story of the resistance. The mass strikes by car workers that brought cities to a halt and military governments to their knees. Its in this environment we first read about the future Workers' Party President, Lula. Lula's story of his rise from a poverty stricken, indigenious background to the leadership of Brazil is a near fairy tale. Robb keeps it very much in the context of a system prepared to destroy the poor in the interests of the rich, and politicans who collapse under the weight of their own corruption.

Lula's victory was an immense blow to the ruling class of Brazil, though Robb points out that this only happened in the context of the Workers Party blunting some of the edges of their most radical politics. Its for this reason that Lula's presidency no longer has the hope associated with it, though there have been improvements for some of the poorest.

Much has happened since this book was published. There are more stories to be told. A Death in Brazil is a good introduction to contemporary Brazilian politics, and Peter Robb tells a good story. When some of the corrupt politicians are brought to justice, or meet their ends, it felt much like the climax to a detective novel. So while this isn't the pure piece of history you might want, it is a damn good read and will probably fill some time on a beach in Rio.


Mann - 1493: How Europe's Discovery of the Americas Revolutionized Trade, Ecology and Life on Earth
Posted by Resolute Reader at 12:33 pm