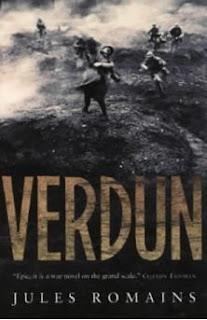 The Battle of Verdun, that took place in early 1916 was one of the most horrific clashes of World War One - well over 700,000 men were killed, wounded or went missing in the battle. It was marked by enormous barrages, the first systematic use of flame throwers and like the Battle of the Somme does, it continues to cast its shadow over subsequent generations of Frenchmen and Germans alike.

Jules Romains' novel Verdun is, at least according to the blurb here, a "lost treasure", first published in 1938 it is an unusual novel. There is almost no narrative structure, save that of the Battles' history itself. Instead chapters are devoted to a few individuals, some soldiers, the occasional person fighting on the "home front", officers and generals and on one sole occasion, the Kaiser himself - the only appearance of the German enemy in the book. I picked it up, expecting that this would be a French version of All Quiet on the Western Front. As a novel it is very different to that powerful story. Yet in an unusual way, despite the occasional lapse in translation or the somewhat overblown dialogue in places, this remains an interesting work, though its lack of narrative makes it hard to follow at times.

The first chapters deal, as many novels of World War One do, with the way that the patriotic glee of the opening days are to be contrasted with the dull horrors of trench warfare.

"Were were those battles for freedom which begin with the soudning of the "charge" and end with cheering and the song of victory? The people of France almost blushed to think that they had ever believed in such things."

Nonetheless, if there was one ambition that remained;

"it was the destruction of war itself; its suppression for ever, its deletion from the pages of history. That, and that alone, must be the object of this war. There should never be another."

Passages like this, and the late reference to France as the great friend of Poland are perhaps a reaction to the coming Second World War. Yet the book itself is less an anti-war novel as a book about the reality of war. So we have the ordinary soldier scrabbling in mud and snow and praying for his life, together with the plump industrial profiteer, getting rich on the shoddy equipment he's selling to the army. Finally, Romains holds real contempt for the generals and politicians , those men who play games with others lives. As one of the soldiers remarks as he's about to return to Verdun;

"War, claims many victims, but very few of them are innocent. For some time now, as I think I've told you already, the spectacle of my fellow-men has filled me with loathing. The trouble is that those who are most to blame are not, as a rule, those who suffer the worst punishment."

Romains however makes this a soldiers war. The home front knows little of the reality of the trenches. The Generals care less, but talk of sacrifice. Only the soldiers understand and they have their "freemasonry of front-line fighters" to keep them going.

As the novel finishes with truck-loads of French soldiers heading for the front and a renewed offensive, we are left with little but despair and hopelessness. This perhaps was the feeling of many of those French people who survived Verdun, and lost friends and family to its horror, as they contemplated renewed European war.

Tuchman - The Guns of August
Posted by Resolute Reader at 1:11 pm

A great reading follow up to 'The Guns of August'and a much deeper insight into the psychology. The 'narrative structure' is driven by the events themselves, the characterization of the individuals portrayed and how they were influenced by rank, personal conceit and politics. If you appreciate, say, Vargas Llossa and don't mind thinking a bit this will be a hit.